The 1950 Census has been made public and I recently found my 1942-born mother living with her parents and siblings in Munhall. She was seven at the time the census taker visited. It is the first official proof I have from her “permanent record” – she was a little girl living with her family, her happiest years by her own admission.

I did not know her family lived in Munhall in 1950 – I knew they had lived ‘briefly’ in Homestead per her stories, but I just assumed they relocated to Bethel Park while was was very young. Most of her stories are tied to the South Hills. I doubt it was her consciously attempting to erase history – her bout of encephalitis literally erased her history and her short-term memory.

It is good to have some new fact that captures my curiosity, something to distract me from the fact that I am now motherless on Mother’s Day.

It was never a big deal in our family. No regular rituals. It wasn’t a deliberate cruelty, just another example of the thoughtless way we meandered through each other’s lives without clear boundaries and protocol, even traditions. Mothers’ Day always felt like a holiday I *should* observe (along with Father’s Day) because that’s what the world wanted.

Now, my mother has died. Her grave marker is not permanent yet. I don’t have a copy of her death certificate yet. So the permanency of her death has yet been added to the annals of our lives. Of my life.

Friday night, I won a national award for this very blog, my second win of this particular award. I didn’t have anyone to call, no family. My brother and I don’t see eye to eye on politics so I wouldn’t share it with him. Laura’s family isn’t interested in these things (or me.) The last time I won the award, I told several cousins and such but they didn’t really respond. The same was true of my wedding in 2021. Those milestones just didn’t resonate with anyone to whom I am related.

If I were to try to tell my mother, I would have to wait for the actual award to arrive so she could read the inscription and squint at my phone to remind herself what a blog is. She would not succeed with the latter, but with the first part – she would respond to my enthusiasm. It would be sincere, but not fully comprehending why my typing on my computer would lead to an award. And that would be okay.

Mother’s Day is supposed to be about lifting up the mothers in the world. And we feel sad for those without mothers. I’m not sad for her – I am still absolutely confident she truly reached her Promised Land. And I can’t really be sad for me because I wanted that for her.

It is just a little tougher than I expected for two milestones in the same weekend to pass by without people who share a kinship tie by blood or marriage acknowledging that I am a person who had a mother. And now I don’t.

Thank you to everyone who made a donation to ‘Kerry’s Kittens’ – a fund through the nonprofit I founded late last year, PLC. In the past few weeks, we’ve sent kitten food to several rescues and we are trying to help someone who to trap two litters of kittens. So far, no kittens in our colony. 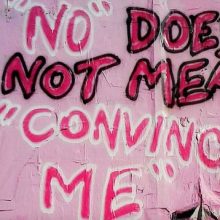 Don’t Crash Into Me