Pittsburgh Mayor Ed Gainey made a landmark announcement today, sharing that he has appointed Maria Montaño as his Press Secretary. Montaño is an experienced communications professional who brings a lot of talent and wisdom to the position. She also happens to identify as a proud trans, queer, Latinx woman.

Montaño is possibly the highest ranking Latinx and/or transgender woman to serve in a Mayoral Administration. There have been trans folx and Latinx folx in other departments, including serving as directors. But directing all communications for the Mayor’s office is a different type of visibility and access that we should celebrate. I think she is also the highest ranking trans woman in any City capacity. I will hopefully publish a Q&A with Montaño soon, building on our previous conversations to explore all these great ceiling smash moments.

Montaño is possibly the highest ranking Latinx and/or transgender woman to serve in a Mayoral Administration.

To all of my trans, ENBY, GNC, and queer readers in this region – you deserve to feel good about this news. You see yourselves, you’ll hear yourselves  in this administration. And we can appreciate the sacrifice she’s making because there are a lot of people who won’t be happy. Her service to the community will come with a price few others in the administration will pay. She knows this, we know this, but I suspect most cishet folks still don’t know this. All of us owe her a debt of gratitude for assuming that burden.

But there’s more. This is the perfect press release for Mayor Gainey to share his official letterhead that features his pronouns. Go ahead take a look at the top.

Mayor Gainey mentioned this recently to a member of the Mayor’s Commission on LGBTQIA+ Affairs and I believe gave credit to the meeting he had with this Commission for motivating the pronouns. I’m not 100% sure about that, but I do know he was pleased to share this with the Commission. I think it is terrific.

There’s more. The Mayor is requiring his office staff to use pronouns in their email signatures and is looking beyond that office to see what else he can accomplish. I have some ideas, but I’ll save those for the Commmission meetings. I’m unaware of other Mayoral offices using pronouns, but I will certainly be asking.

In the meantime, we should all be pleased that Maria will break barriers and raise the bar for elected officials to include trans, nonbinary, and gendernonconforming individuals in their teams. Visibility matters, especially here in Southwestern Pennsylvania. I’m pleased that a very competent communications person who probably doesn’t subscribe to the philosophy of “only answer important email” like some predecessors in this office will be at the helm.

PITTSBURGH – Mayor Ed Gainey announced today that he has named Maria Montaño as his Press Secretary. Montaño will serve as the formal spokesperson for the Office of the Mayor and will be acting as primary liaison between the media and the Mayor’s office.

“I am proud to announce Maria Montaño as my Press Secretary,” said Mayor Gainey. “She brings a wealth of communications, media, and lived experience to my Administration, and I am confident in her commitment to making Pittsburgh a more livable city for all of us.”

Montaño previously served as a Communications Specialist with SEIU Healthcare Pennsylvania, the state’s largest and fastest growing union of healthcare and hospital workers. In that role Maria helped hospital workers across Pennsylvania form their unions. She also served as Communications Director for the Professional Disc Golf Association World Championships that was hosted in Pittsburgh in 2015 and worked with Councilwoman Erika Strassburger to expand protections for the LGBTQ+ community in Pittsburgh.

“I am honored and excited to serve the City of Pittsburgh,” said Montaño. “I am looking forward to working with the administration and other city leaders to lift up our great city and communicate the incredible work that Mayor Gainey and his entire administration is doing every day.”

All press inquiries should continue to be emailed to press@pittsburghpa.gov. 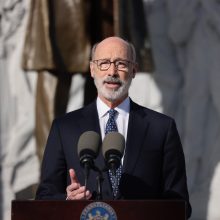