Philadelphia native and Black trans woman Remy Fennell is the most recent victim of fatal violence targeting the transgender community. She was 28-years-old. Remy had relocated to Charlotte, North Carolina where she pursued a career in hair styling as ‘Remy Kreations.’ It appears that Remy also supported herself with sex work.

On April 15, Remy was found dead at the Sleep Inn on North Tryon Street Police say they were called to a disturbance call at the hotel around 2:30 a.m. Thursday and found her with a gunshot wound in a room. Medic pronounced her dead on scene. (WBTV – deadnaming and misgender)

Police and trans leaders in the Charlotte community believe there may be a link between Remy’s murder and the murder of Jaida Peterson on April 4, 2021. They’ve issued warnings to trans sex workers who may be targeted.

In what he called an “urgent” message, Charlotte-Mecklenburg Police spokesman Rob Tufano said Thursday both recent cases had clear similarities: Both victims were shot to death in hotel rooms and, according to the police department, both were sex workers and both were trans women. Multiple LGBTQ+ advocacy organizations and activists helping with housing and other support for the trans community in Charlotte posted safety alerts Thursday night.

Charlotte Uprising said on Twitter late Thursday that “hotels are not safe at this time,” and that organizers were working to fundraise for alternative housing for Black transgender women who need other places to stay.

I do not at all want to downplay the seriousness of the situation – if the cops are warning women, there’s clearly more to the crime scenes that we know about. All LGBTQ folks in Charlotte will hopefully reach out to support our sisters and keep them safe. 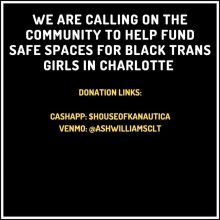 But it is equally important to acknowledge Remy’s life and death as more than the criminal intentions of her murderer. She deserves that we #SayHerName and celebrate all that she brought to this world. She was a young woman who should have had a bright future. She deserved dignity, safety, and her humanity to be acknowledged.

To make sure that she was good. She was a vibrant young transgender woman who was just trying to make it & was doing it. She started her own business, graduated from cosmetology school. We weren’t close but I understood her from a different point of view. Shouldn’t no family nor friend feel like they are alone & no one care’s or don’t love them. She has left her mark on the hair industry. Don’t be ashamed of a family member or friend just because they identify themselves different just hold them & tell them it’s okay. Families we got to do do better.

Remy is the seventeenth trans, nonbinary or gender nonconforming person reported killed in 2021. Sixteen of these neighbors have been BIPOC. She is the thirteenth victim who identified as Black.  In total, there have been SEVENTEEN murders or suspicious deaths in the first 77 days of 2021, an average of one death every 6.1 days. 12 of these victims were under the age of 30. So far. That we know of as many deaths go unreported or unacknowledged.  Note – in this summary, I include suspicious deaths that as you can read below are often later confirmed homicides.

Rest in power, Remy. The beauty you infused into your world is a testament to your own beauty and resilience. You deserved a better outcome and you deserve a society that gives you more options. You deserved to be protected.