This was a long one. We checked out of Erie, had a local breakfast, and hit the road traveling on US 60 and PA 59 through the Allegheny Forest into the region known as the PA Wilds.

It was basically a long, winding two lane road. We listened to The History Chicks podcast. It took us into Bradford, PA in McKean County where we visited the Zippo/Case Museum.

This destination was my choice. My maternal grandfather was a District Manager for Zippo in the 40s, 50s, and 60s. He died before I was born. A few years ago, I learned he was involved in the disappearance of the original Zippo lighter car.Yikes.The museum is interesting, using the lighter as a frame of reference for the 20th century.

We both bought a sweatshirt, took some photos, and headed over to grab a sandwich at Beefeaters. It felt like a tribute to Mad Men, but in a good way. Then we jumped back in the car and aimed for Ridgeway in Elk County. Our destination was The Towers Victorian Inn, a B&B.We are in the Nina Ravencroft room. We are sad that they do not have MSNBC especially the night of the North Carolina special election.

After we arrived, we met up with Bob Imhof who offers historical tours. He is terrific. We sat with him for an hour talking about history and more.Then we needed dinner so we went to a place called Aielos. To my delight, they had a homemade hot turkey sandwich – the perfect meal at 7:30 pm for our Midwestern sensible stomachs.Our server was nice, but perfunctory. I tried mentioning that we are from Pittsburgh to seize her imagination. Then I went for a hail Mary and mentioned Ledcat is from Mercer County. Turns out her brother lives in Greenville so a connection was established.

So this portion of Pennsylvania was built on the lumber industry in the 19th century, peaking between 1880-1910. When the forests were exhausted and the elk herds almost gone, the community was gutted. A methodical rebuild process began in 1910 and continues to this day, but the regional industries are now tourism and outdoorsy things.Tomorrow, we’ll learn more … 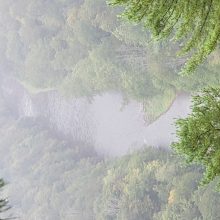 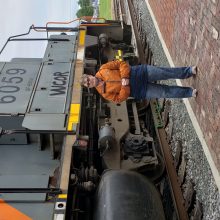 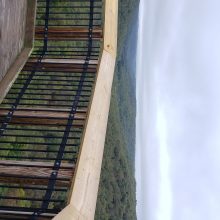