August has been a cruel month. From Monica Roberts at Transgriot comes word that Tracy Single, a 22-year-old Black trans woman, is the 16th official transgender person*** to be murdered in the US during 2019.  While her body was discovered on July 30, it wasn’t until August 11 that local activists were able to confirm that her death was a homicide and to acknowledge her identify and verify her name.

There was a July 30 news report of a woman found dead in a gas station parking lot along the eastbound feeder road in the 11000 block of the Katy Freeway (I-10 to the rest of y’all)  at 3:34 AM CDT

Two local stations, ABC13 and FOX 26 reported her as a woman who did not die of natural causes, and HPD detectives were investigating the case.  It took a week to pass here in H-town before we were advised by our HPD LGBT liaisons that the woman who was found along I-10 back on July 30 was actually trans and was murdered.

The Houston Mayor’s LGBTQ Advisory Board arranged for the City to honor Tracy’s life and acknowledge her death by lighting City Hall and six bridges in the colors of the trans pride flag. Tracy is the 15th known Black trans woman to be murdered in 2019 to date. 22 year old Jordan Cofer is the only known victim on this list who was not a Black trans woman. Cofer was killed by his brother during the mass shooting in Akron on August 4, 2019.

Tracy was a native of New Orleans and had only recently relocated to Houston in June. She was there a little over six weeks before she was killed. The cause of her death has not yet been released. Final arrangements are not yet available.

Rest in power, Tracy. It is horrifying to find words to bring any sense of closure to the violent of a 22-year-old young person. Your life was far too short and you deserved a chance to embrace your new hometown. I am grateful Houston as such a vibrant network of trans advocates to ensure your death was not forgotten or unaddressed. I only wish you also had had a chance to lean into that network on your own terms. 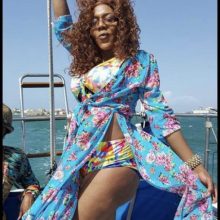