In mid-February, I posted about racist fear-mongering billboard content on an electronic billboard in Worthington Borough, Armstrong County, Pennsylvania. Along with describing the billboards, I shared 11 suggestions for getting involved to resist this messaging.

A few days later, the billboard’s lessee created even more atrocious content and I posted an update.

I’ve heard from multiple folks on the ground in Worthington who do not want to speak publicly. I’ve spoken with members of the media who need a local perspective to pursue a story – otherwise, it boils down to a lesbian blogger in Pittsburgh being outraged about billboards two counties away. If you are such a person – one with ties to Worthington and willing to speak with the media, let me know.

Earlier this week, I noticed that traffic to these blog posts was increasing from Facebook so I assume someone is sharing it. Then the comments began. If you read this blog regularly, you may notice that we don’t really get a lot of comments – most conversation takes place on other platforms.

I understand that people are making a lot of calls to the Worthington-West Franklin Fire Department and they in turn are trying to connect with the billboard lessee who is allegedly wintering in Florida. As one does while manipulating hate messages remotely from your computer like a racist supervillain.

I’d like to add one important emphasis at this juncture. PennDOT has zoning authority over this billboard which is apparently a brightly lit driving hazard. The State Legislators that govern Worthington and surely have dedicated PennDOT staffers are State Representative Jeffrey Pyle and State Senator Donald White. I’m unclear if PennDOT would have to grandfather this structure in or how long the regulation process would take or so forth, but it is a systemic response to both the hate messaging and the public safety issue.

And then this comment that I won’t approve. This is what people think it is okay to post on my blog. 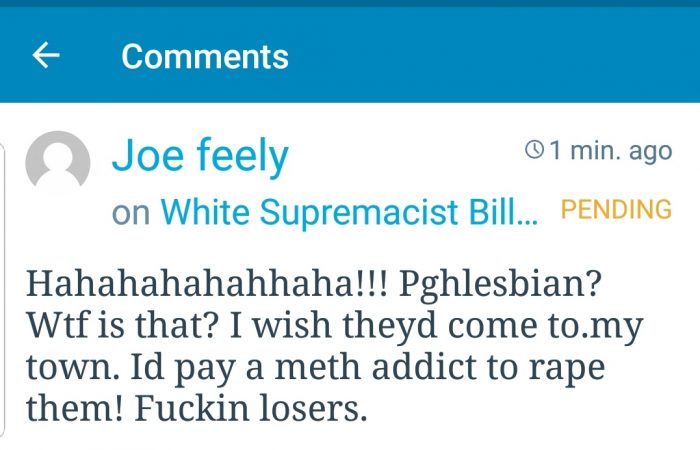 A little taste of the blogging life. Comments are so 2009. It would be great to see some comments that don’t prop racism or bigotry or President Trump or rape, but I take comfort knowing that they are out there – if they weren’t, people wouldn’t be bothering to post these fine examples of neighborliness.

It is not so funny or wry when the rape threats start up, but that’s very much part of the blogging life for women. Always has been, always will be.

Independent bloggers are important tools in democracies. Help us resist silencing tactics with a donation today.