This one hurts me on a personal level.

When we learned that the Pittsburgh Marathon was teaming up with Chick-fil-A to sponsor the youth events, some of the first people contacted for support were City of Pittsburgh officials. They made a lot of promises about looking into things, standing with the LGBTQ community in a public way, holding press conferences, etc.

So when I was the fall guy in a FOX News hit piece about this resistance, I tried to push through the hate and stay focused on soliciting new signatures for the petition because I thought allies had my back on this. I could have opted to lay low and avoid the firestorm.

I was wrong. None of those allies has said word-one to me and some who are talking with others are pulling back on their willingness to confront the Marathon about this. Even with thousands of hateful comments reigning down on me and the LGBTQ community in general, they aren’t even contacting us. That felt like a fatal blow to the effort.

So of course this is when the HRC Municipal Equality Index is released with Pittsburgh earning a perfect score. Ironically, Chick-fil-A has earned only a big fat 0 on the Corporate Equality Index. Pittsburgh is touting their score without the grace or courtesy of acknowledging this other burning issue.

I guess maybe it just isn’t burning the people who matter enough.

I shared a bit of my experience on the beat down side of this harassment over at The Pittsburgh Current.

That’s some equality. And I guess we’ve learned our lesson that survivors of any sort of abuse should just stay mum and not rock the boat.

UPDATE: A few hours after I published this, I saw a tweet indicating that Mayor Bill Peduto had made a statement about the situation

Mayor @billpeduto calls on @PGHMarathon to cancel Chick-fil-A sponsorship. Says it’s a, “community event and the sponsors should represent all of the community.” More @KDKARadio 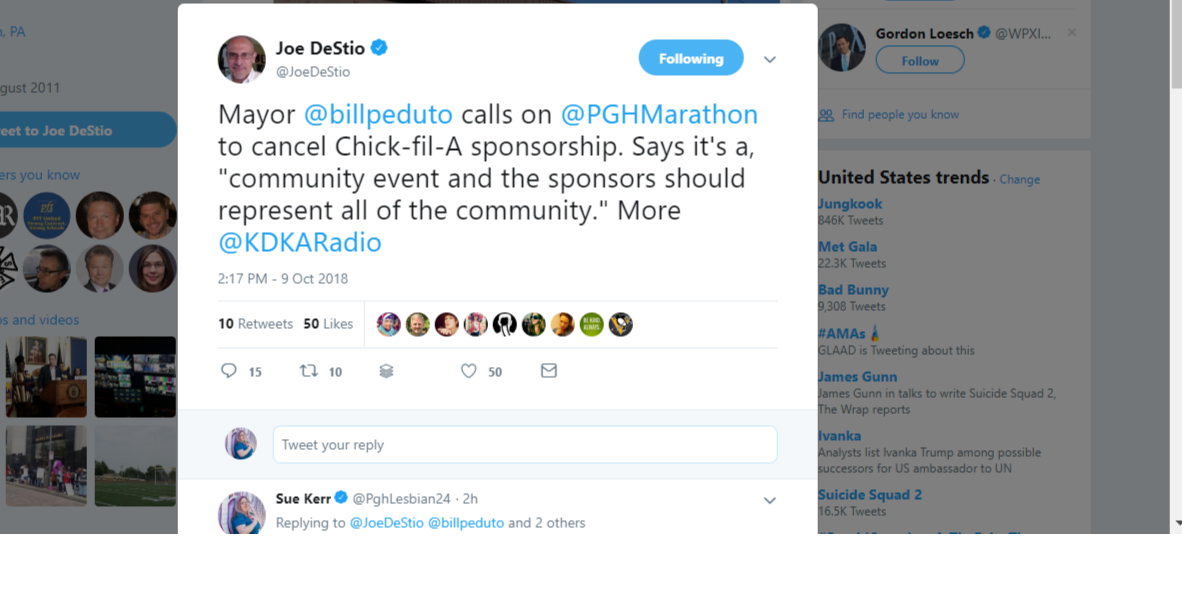 I reached out to the Mayor’s spokesman to confirm this statement. He told me that it was not a formal statement and not quite a call to cancel. “Chick-fil-A owner are not in step with a city and an event that is welcoming to all, and he urged Marathon organizers to find another local or national sponsor.”

I’m hopeful that Mayor Peduto will soon be joined by other local leaders who have a vested interest in a Marathon not being sponsored by a divisive, bigoted company. That would include Allegheny County Controller, Chelsa Wagner, who is a member of the board of director for P3R. It would also include all of the members of City Council, some of whom are runners and of course, Councilor Bruce Krause is openly gay.

It doesn’t feel like they feel any urgency here. But there is. City employees are facing a November deadline for their wellness decisions for 2019. One of these decisions involves the new ‘CityFit’ program which offers bonus points to employees who complete various tasks, including very significant points allocated to participating in the City Marathon and the Great Race. I don’t think it is fair to the LGBTQ employees to keep these options on the table. And for LGBTQ folks represented by unions, perhaps there might be grounds for formal complaints.

Then there is the reality that City contracts with P3R to administer the Great Race. That’s a direct conflict for the City’s nondiscrimination policies.

The list of conflicts goes on. It could be resolved if City Council members joined the Mayor with a public statement and a strong push for the sponsorship to be ended.

I hope we hear more on this and soon. The behind the scenes negotiations are quite cordial, but there is a time when action is necessary. I can’t help but think how it took 24 years for the City to approve and implement a full, transparents nondiscrimination policy. 24 years. It began with sexual orientation in 1990, but it wasn’t finite until 2014. It was only in 2017 that the City offered comprehensive health insurance coverage for transgender health care needs. We’ve still only elected one openly gay member of Council. Quietly LGBTQ folks outnumber openly LGBTQ folks on the City workforce.

Allowing time to slip by for the sake of propriety hasn’t served the LGBTQ community very well.