Carrie Rowe, Superintendent of the Beaver County School District, has been an educator for more than 20 years. She’s also a lesbian and last night, opted to disclose that very publicly to directly address rumors, innuendo, and the fallout of both around a personnel matter involving a suspended Principal.

In August, the district has suspended Steve Wellendorf, the principal of Beaver County High School. His supporters rallied, pushing for him to be reinstated. Some took if further, including Luke Berardelli, a former member of the Beaver City Council and alumni of the high school, with the allegation that the suspension was tied to Wellendorf’s support of a Christian student group and Rowe’s sexual orientation. From the Beaver County Times:

Berardelli alleged last week there was a “toxic culture” in the school and that Rowe had targeted people who are involved in a Christian group Young Life, a group he said Wellendorf is associated with.

During public comment at Monday’s meeting, Berardelli asked the board to reinstate Wellendorf. He did not ask the board not to renew Rowe’s contract, as he had previously announced his intention to do.

At Monday night’s School Board meeting, the board solicitor clarified that the suspension was not tied to intolerance, but district policy. The reasons will remain confidential because it is a personnel matter.

I encourage you to read the Beaver County Times summary of the meeting, especially the perspective of the students who turned out to the meeting. Students and parents seem very aware that Rowe’s sexual orientation was being used to attack her credibility and her authority to make personnel decisions.

You should also read this rambling piece (fair warning) from the Beaver Countian, a self-described “guerrilla journalism venture” focusing on Beaver County. That post in particular has a lot of background on Young Life, Wellendorf’s history, and other individuals in the school district who have implied ties to the story.

What I want to share here is a video of Carrie Rowe’s statement to the School Board about the situation and specifically about her sexual orientation as an influence on her leadership of the District. The video was provided to me by someone at the meeting.

Rowe rightfully calls out the tactics here as a form of bullying, using her sexual orientation as a divisive tool to undermine her professional credibility. She notes that just a few years ago, her critics would have had to trump up other allegations to camouflage their real motive – her sexual orientation. But now they are ‘brazen’ enough to openly target her for being a lesbian.

She also notes that under Pennsylvania law, she could be fired from her job as the Superintendent for being a lesbian. Pennsylvania does not have statewide nondiscrimination protections and neither does any municipality in Beaver County. And the venom and ignorance that fuels the push to fire her are the same things LGBTQ students in Beaver County and throughout Pennsylvania must contend with every day.

Rowe suspended the principal. That is one of her job duties – personnel management. And another duty is to maintain privacy around personnel matters as dictated by district policy and the law. If the School Board felt her actions were inappropriate, their job is to scrutinize her decisions. They have not expressed anything less than support of her actions. Wellendorf remains suspended.

Please note that discriminating against Wellendorf because of his Christian beliefs *is* illegal under Pennsylvania law and would be something the School Board and their Solicitor would surely address, especially under this much public scrutiny. So it seems reasonable to conclude that Wellendorf was suspended for some other reason and there is good cause.

Attacking the sexual orientation, character, and professionalism of the person who suspended him is one way to sidestep the real issues and try to force the District to rescind the suspension. Carrie Rowe was outed by defenders of a Christian student organization. She was what we might consider ‘privately out’ prior to this meeting in the sense that she had never made a public statement on her personal life. Most of us don’t.

Rowe came out publicly to rebute the allegations of professional misconduct on her part and to protect students, including LGBTQ students and students who are part of a faith community.

The impact on the students is one of the things Rowe said prompted her to come out. During her statement, she mentioned how suicide is one of the top three causes of death for individuals age 10 to 24 and of those, LGBTQ-identifying students have a seven times greater risk for suicide.

“I care about this district and all our students and I care too much to remain silent any longer,” Rowe said, directly addressing the students. “As your superintendent I tell you, no matter who you are, who you love, where you worship, if you worship, what your racial background is, what your disability status is, you have a safe space here. I will make no room for hate.”

It makes zero sense for someone who is not protected by state law to target someone who is protected from discrimination. Wellendorf has several legal avenues to pursue any claims he personally has that his Christian beliefs are the reason he was disciplined in his professional life. There’s no information to suggest that he has pursued those avenues. His supporters could help him with those avenues by helping him hire an attorney, providing statements, etc.  That’s how the process put in place to protect people from discriminations works.

Instead, they opted to publicly attack his supervisor because of her sexual orientation. It is like a shortcut around the legal process. People who take shortcuts and opt to bully someone rather than let the official process work itself out usually don’t have evidence to back up their claims. They seemingly don’t allow for the possibility that Rowe made an informed professional decision about a personnel matter based on her experience and qualifications. They don’t allow for the strong probability that they don’t have all of the facts, even from Wellendorf himself. They don’t present any concrete evidence to tie Rowe’s sexual orientation to anti-Christian beliefs.

Kudos to Carrie Rowe for speaking her truth for her own sake and for the sake of every student in her district. I don’t doubt she will suffer some consequences, but I hope and continue to work for the reality where her sexual orientation is not grounds for bullying her or anyone else. She could have remained silent, but she spoke up for students whom she knows are facing these dynamics every single day. That’s the moral leadership we need in public education.

Here is Rowe’s statement in an image file. I’m trying to find a transcribed document file. I will post that if it becomes available. Video below. 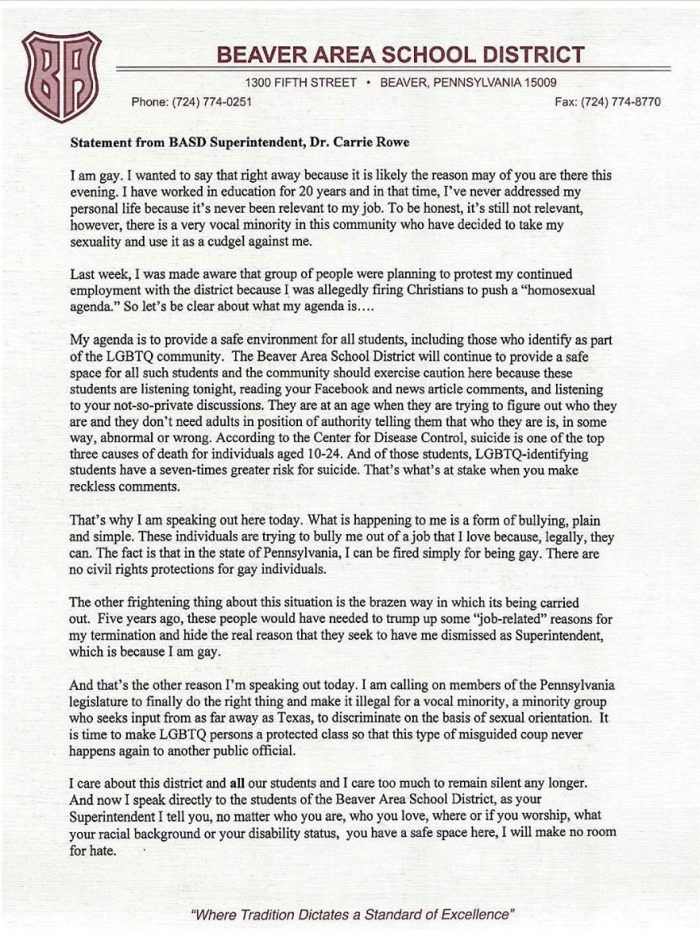