After seven weeks, we finally (re)trapped our feral/homeless female cat, Mamma Mia, and reunited her with her female bonded companion, Maylee. They are both in our second bedroom with access to food & water, comfortable temperatures, and no fears of being hit by a car, attacked by another animal, etc. They are vetted, spayed, vaccinated, etc. And they seem to be still bonded which is great.

The backstory is the sort of tale best shared over a beverage of choice with lots of table pounding, veiled references to canonical villains, and copious curse words. But I’ll try to behave myself.

In the fall, we saw some cats coming around regularly. We began to feed them. After a few weeks, we could identify them and assigned nicknames. We filled our sturdy outdoor doghouse with hay so they could have shelter during the winter. They had fresh water and food every day during this horrid winter.

The basic crew members of this loose confederation of cats:

Mamma Mia – longhaired tabby who just struck as both female and motherly. She grew fatter despite it being a tough early spring so we suspected that she pregnant. Didn’t show up for a while and then brought her kittens one day. So willing to engage us that we suspected she was actually an abandoned pet, not a true feral.

Maylee (formerly Little Precious) – younger female tiger stripe/tabby. Always with Mamma Mia. Clearly younger though, maybe a year old? Perhaps a sibling or a kitten from an earlier year? She helped with the kittens when they sunned on our deck, playing with them and bossing them around while Mamma ate.

Mr Precious – another cat who looks like our Precious, but a tom. He looks like life has been rough. Moves on the fringes of this group

Assorted other cats – just random cats that came into the yard with our crew and had some food. We suspect they are pets that are permitted outside. I think that’s a pretty awful state of affairs living a block from a highway, but what do I know?

Kittens – Mamma and Lothario had five kittens. We saw them several times on our deck. Mamma would nap here and they would feed so we knew she was still nursing.

The feral cat people suggested we use available resources to trap and get the critters vetted – a spay/neuter, vaccines, simple exam, etc. So we did. It was a lot of hard work, a lot of waiting, and a lot of stress.

A very sad moment came one early morning when Ledcat found a kitten on our deck, obviously in great pain. Mamma was watching. We scooped it up and rushed it to the PVSEC emergency room. They told us he had a neurological condition and couldn’t be saved so he was euthanized. I believe that Mamma brought him to us. Maybe that’s fanciful. It was a sad moment, but I’m glad the poor thing didn’t suffer too much longer. And that we had the $ resources to pay for the ER vet visit of over $400.

A few days later, we caught Mamma Mia late one evening and I managed to snag Maylee (then Little Precious) early the next morning. I was on the road to the Feral Cat Clinic at 7:30 AM. They were returned to us by 5 PM, both spayed & vetted & basically healthy.

This where the story takes an unexpected turn. We had already planned to keep these two. They were clearly a ‘bonded pair’ regardless of their genetic connection. Our plan was to put them into our second bedroom so they would be safe and see if they could be socialized. If we trapped the other cats, we would get them to the clinic and then release them as per the feral cat best practices. IF the two lady cats did not handle being indoors, we could address that further down the road.

But … the kittens. We couldn’t let them die because we kept Mamma with us. Mind you, Mamma was allowing me to pet her through the trap and so forth so there would strong signs she could be socialized. So this was tough. We followed what people told us was best instead of what my intuition was telling me was best – we released her.

Two days later, we learned that someone else on our block was taking care of the kittens – with the help of the very same Feral Cat group that was helping us (not HCMT, if you are wondering.) When I complained, an employee of this group released information, my confidential information, to her roommate who began bashing me on Facebook for my complaints.

What? Yes, this happened.

So I complained about HER and ended up ‘banned’ from the animal welfare agency. That’s a story for another day, but we were on our own with regard to Mamma Mia. We still have no idea what happened to her kittens. Or if they were rescued and fostered. Sigh. But they were weaned when we first caught Mamma and it’s a damn shame she lost seven weeks of health & safety because of this.

So we sought out other supports. We bought our own trap. We continued feeding Mamma Mia on our deck. And we worked to socialize Maylee in our second bedroom. Maylee has been coming along very well – she comes out from under her chair when Ledcat is in the room. She’s gaining weight – she eats like a horse. She plays with her toys. She’s even taking to eating and playing when Ledcat is in the room, but still hisses at me. LOL.

In the middle of this, two women driving down the street one afternoon stopped to tell us “hey there’s an injured cat behind the alley” and drove off. That’s great.  I don’t think either of those ladies has ever chipped in a penny to our cat rescue efforts. Or introduced themselves. They just shifted responsibility onto us and drove off. That’s classic jaggoffery.

So we found that poor kitty who was in very bad shape. He wasn’t known to us, but a neighbor caught him with an animal net and put him in a crate. We rushed him to New Kensington vet where he had to be euthanized immediately. It was sad, but at least his suffering wasn’t prolonged.

Pro-tip: If you see an animal that’s dying hurt, do something beyond scream out your Astro van window. Take five minutes to at least call Animal Control. Use Facebook to reach Scrap the Trap. If you are going to tell someone about it, knowing they will take some action, at least follow-up or offer to chip in a few bucks or SOMETHING that indicates you are not a monster. Well, that’s better than the woman who got angry with us because we blocked a path with our car while we tried to help this cat. She actually wanted to get out of the car and fight me because I glared at her. It’s not even a real road.

That kitty’s fate was on my mind, so we began preparing our trap, putting Mamma’s expected meal inside with the release trigger rigged so she could eat and walk out either side of the trap. She regularly came at dawn and dusk, sitting expectantly on the deck until someone fetched her vittles to her place. She ran, but sat just on the other side of our chain link fence, watching as we placed the food down.

The trapping took two attempts. The first night we used tuna and wet cat food, plus some KFC. She pulled the food out of the trap somehow and looked at us through the door like we were amateurs (fair accusation.) That was about two hours of her sunning herself on the deck, hoping to wear us down with guilt and those big eyes.

The next night, we used sardines and bam! We had her. It only took an hour for her to finally go all the way inside. Just as we were leaving for ice cream. Ha, on us. I stood by the kitchen door window for most of that hour, willing her to just take one more step into the trap while she pulled the sardine our, morsel by morsel. She would look in the house and then sigh a little bit. But she did it. She took that risk, that step.

She sat in the cage looking woeful with that sort of fool me twice, shame on me look.. I carried her upstairs into the second bedroom and set her free in the large dog crate I had set up earlier in the week. She was unhappy. 30 seconds later, she found a weakness in the crate and escaped into the general room.

Oh fuck. It was like a cat explosion with just one cat. She raced up walls. She ran on all the furniture. She whizzed back and forth until she was pooped and sat there panting. I just remained in one place the whole time, singing her name-sake song to her softly. Then she ran behind Maylee’s chair.

We didn’t know if they would remember that they were bonded. We had no real idea what to do if they fought. Our friend Tara came with some herbal help and advice. That’s when we realized that they were both under the chair, sitting together. Not a single hiss, not a growl, not a peep. They just sat together. For hours. I took comfort that when I flipped on the radio, an ABBA tune was in mid-play. Surely, that was a sign from the gods! (Mamma Mia – ABBA, get it?)

This morning, we heard Maylee (we think) playing around 5 AM as she is prone to do. When I entered the room, Maylee was eating and scurried under her chair. Mamma Mia was hidden behind an overstuffed pet bed. She remained still so I just fixed the food & water and let them be.

Later in the day, Maylee was watching me from under her chair and Mamma had turned herself around in a more relaxed, but watchful posture on the pet bed.

Whew. That’s a relief. Maybe they know each other and don’t feel so scared? That’s my hope – that the lady cats will grow old & fat together with the cat ladies over the next 16 years.

We will continue to provide food, water & shelter for the other poor ferals living around here. When we get the internal lady cat situation under control, we’ll consider another round of trapping attempts to get the others spayed/neutered and so forth, then release them.

If you are still reading, why not revisit the Q&A I did with Scrap the Trap about urban wildlife?

Support independent blogging (and the cats!) by investing in our blog

with a donation today!

Behind the mews with my Facebook Live with kittens 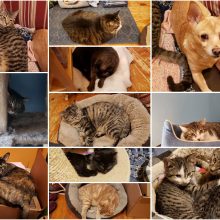