Monday is #LGBTQFamilies Day on social media, sponsored by the blog Mombian and the Family Equality Council since 2006. This day celebrates LGBTQ families. Once again, I’ve decided to share #AMPLIFY posts highlighting the voices of parents, step-parents  and grandparents and other caretakers of children.  If you are a LGBTQ person with ties to Western Pennsylvania, please add your voice to this archive. 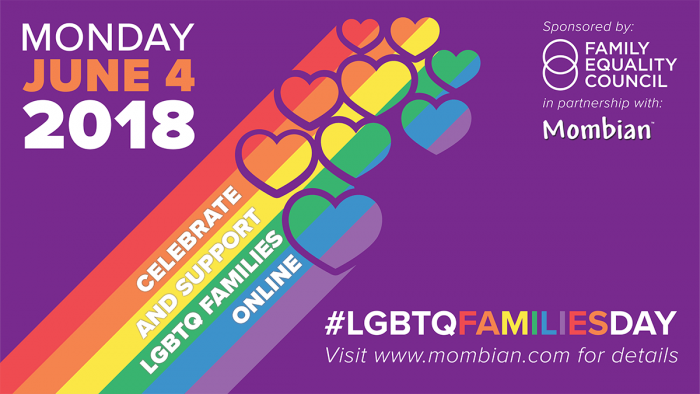 The name of this project has been updated to encourage participants who are not bloggers. #LGBTQFamiliesDay is meant to bring together people who are LGBTQ as well as our families and allies. It’s a celebration of LGBTQ families whether you’re part of one, know one, or just want to support them. (via event organizer Mombian) Please follow the link to read all of the blog posts and social media content honoring our LGBTQ families.

We ask a lot of (mostly) open-ended questions about their identities and experiences. We do not ask any questions specifically about their family status, but many of them mention the fact that they are parenting in the context of one or more of the questions. About 20% of the contributors are parents. Please note that our project was on a five month hiatus in 2018 because I was recovering from a hysterectomy so the slower growth in contributions is tied to that.

If you appreciate our blogging, please consider a contribution

For my contribution to the annual Blogging for LGBTQ Families Day project, I decided the best thing to do is to amplify their Q&A posts. Please read as many as you like and absorb some of the wisdom and wit they have to share. Please note that I included people I know to be parenting or grandparenting. I did not necessarily include everyone who is a caretaker for a child. If I left anyone out, I apologize. Feel free to reach out to me and I’ll update.

One thing I want to add this year is that some of our contributors do not have relationships with their adult and/or young children. This type of family rejection from an adult child toward a parent isn’t often explored, but I think it is worth reflection. They don’t stop being parents because of that rejection and a few of our posts will explore those topics.

If you or someone you know is an LGBTQ identified person 18 or older with ties to Western Pennsylvania, please ask them to share their story with this archive. The form is here.

If you would like to read our previous years’ contributions

2014 – Summertime Traditions For Our LGBTQ Family

2012 – Being an Advocate: 7th Annual Blogging for LGBT Families

2009 – Blogging for LGBT Families in Pennsylvania