Do you remember Kala Thomas? She was 25 years old raising four children as a single, working black mother in Garfield with the support of her extended family. On May 23, her body was discovered on the hillside behind her home. Her abandoned car was found the next day.  Police have not identified any suspects.

This week, we learned about the shooting death of 26-year-old Nicole Dailey. Nicole was also a black working mother with a young child – her daughter was 7 months old when her mother was shot down while holding the baby. Nicole was getting Nia from the car near their home in Perry South (formerly Perry Hilltop) when she was shot. She managed to get Nia safely to a nearby strip of grass before dying. Nia was unharmed. Police have not identified any suspects.

On July 9, 30-year-old Mia Chantia White was shot to death in Manchester, leaving behind a 14-year-old daughter.

I live in Manchester, have been for nearly 12 years. I didn’t know Mia or Nicole, but I’ve learned that they had ties here. They were still my neighbors. Maybe we walked past one another on the sidewalk or attended a community event together. Maybe they were in the next line at the local Giant Eagle. Maybe they sometimes also sat out and watched the full moon over the bridge or listened to the train. Maybe I know their mothers, aunts, uncles, cousins and other extended family members.

What strikes me about the lives and deaths of these three young black women is how high we set the expectation for their behavior. We question their self-autonomy by suggesting that they shouldn’t be out too late at night or stand on a curb next to their sister’s home or do anything that might suggest they are asking for trouble. My white neighbor the nurse is out on the street at 4 AM every day getting ready to work. If she were shot, that would not be a concern. No one would suggest she was associating with the wrong type of people and thus, imply she was partially responsible for her own murder.

At the other end of the spectrum from victim blaming is this notion that being a martyred mother is the thing we should focus on. If six white children in Bethel Park or Upper St Clair or Shadyside lost their mothers, there would be fundraisers and meal trains and college scholarships and huge piles of diapers, clothes and gift cards to address the day-to-day physical needs of the children. The village would kick into high gear for the longterm. I mean people would be asking about the children, taking an interest in their futures without their mothers.

There would be a lot more pressure to find the people who killed these mothers, these women, our neighbors.

Somewhere in between those is the real story, the stories of our lives that are bigger  than a series of individual choices – where to stand at night, where to work, how many children to have, where to live, whom to trust, – that makes up our own stories. Then there’s the even bigger frame of choices – how we police our neighborhoods, how we resource our schools, how we distribute jobs and value the work done, whether we pay attention to the family of the victims in the months and years after the crime, and how we respond.

I read a blog post on Medium written by Ciara Todd in response specifically to Mia’s death that summarizes thoughts I’m describing:

And the overemphasis of her goodness reminds me of what Black and Brown bodies always have to do when just living and breathing just isn’t enough.

It was almost like we were told all these things about Mia just so she could be mourned. Because her being a single-mother would be cause for judgement (society usually does). Or that the neighborhood she lives in would be cause for dismissal (the gentrification you see explains that). Or that her Black womanhood would say something about her too (because we’re supposedly inherently mean and violent).

All of these things — her life and where she lives — is enough for people to dispose of her importance. Maybe some already performed that stunt. But the rest we must try to not lose their hearts.

I’m sure Mia is all of the good things that her family and neighbors described of her to be. But even if we didn’t know all of these things, would be still care about her life?

I know the answer and it breaks my heart. But I’m not surprised.

You can donate to help the families. There are tangible needs and tangible ways to help. I’ll keep listing the links as I find them.

But there are other investments we need to consider as well, starting with the leadership of black women especially block mothers in our communities. Resources you should consider (not an all-inclusive list, but a starting point.)

Your money isn’t going to change anything. Your investment just might.

I wrote this back in February. It seems appropriate right now, too.

Now the veil between two Pittsburghs is at least catching our attention if not lifting. And this more visible gray area between the two Pittsburgh is an uncomfortable new reality for many of us.

But it’s not really new, at least not to all of us. Living in a political state of fear, oppression and isolation is much newer for white middle class families like mine than for many of my friends. And while it is great that folks are waking up, it is not sufficient. It’s not enough. Their learning – our learning –  curve is long while their sense of urgency is somewhat fragile. And their awakened state is a commodity much desired by everyone.

Of course people who’ve endured a disproportionate degree of the struggle are irritated at having to constantly bring everyone up to speed as a community service. We still aren’t listening, much less validating that they have endured this struggle and founds ways to survive and thrive.

Over on the blog Radical Faggot, this essay caught my eye

Instead of calling for unity and getting along, stopping the infighting and all of the other coded ways to silence people, perhaps we’d be better off acknowledging that there are a lot of people in Pittsburgh who have cultivated these coping skills over the past decades – when we didn’t have to do so. Not just coping skills – resources, talents, experiences and wisdom. We are the ones standing in the way of unity because we can’t wrap our heads around our complicity in the state of things as they are, nor can we let go of what we’ve come to expect for ourselves.

No one deserves to be murdered. Before your mind leaps to exceptions (pedophiles, abusers, etc), try to keep in mind that we have lost site of the general rule that the lives of our neighbors are sacred. If we ever truly believed that to begin with.

Kala, Mia and Nicole deserved to live and raise their children and have their own adult lives, too. They didn’t earn that right by virtue of their parenting or their faith or their community service work. They earned it by being human.

And we need to work on remembering that. 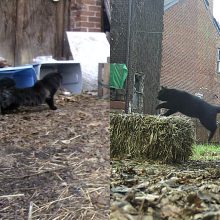 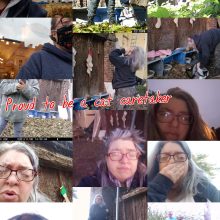 Cat Folx Aren’t Saints, Heroes, or Martyrs. But We Are Your Neighbors.