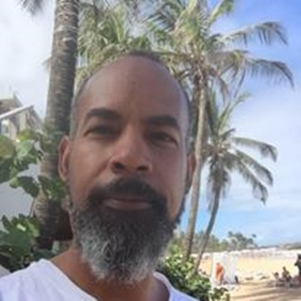 How do you describe your identity? That can be a loaded question. I was born in the US, of Dominican parents and grew up in Puerto Rico. I’m of African descent, and consider myself gay. I guess that makes me a black, gay Domini-rican.

Please describe your coming out experience. Where did you find support? What challenges did you face? Coming out is not a one step process, you are constantly coming out to friends, family and acquaintances. But I will talk about the first time I came out to my mother, I was in the army and I received a letter from her (I still have it somewhere). There had been a few deaths in the family and it caused her to think about her own mortality. She reached out and asked me if I was gay. She said that when I was around 3 years old, someone at the kindergarten I attended (I’m guessing a child psychologist or social worker or something) said to her that I would most likely grow up to be gay. At the time she tried to expose me to more male figures in the hopes that it wouldn’t come true, and in the letter she said that if I was, it didn’t matter, that she would love me regardless. At first I was terrified and my first reaction was to respond by denying it. In those days you had to physically write and send letters through the postal service, so after a day or so of thinking about it, I decided to respond with the truth, I was gay. Even though I didn’t realize it at the time, it was a huge weight lifted off my shoulders, and I believe it helped me to grow as a person knowing that my mother was in my corner no matter what.

How would you describe yourself NOW in terms of “being out”? As I mentioned earlier, coming out is a constant process. I have a pretty big family, so there is always someone who doesn’t know, but I do not consider myself to be in the closet at all. I’m myself and if the conversation about partners or having kids comes up, that’s when I usually say that yes I have a partner, he is male, and I do not plan on having kids. As for the general population, same thing, if they don’t know and assume I’m straight, I correct them when it comes up.

Tell me about the first LGBTQ person whom you met. What impact did they have on your life? The first LGBT person I ever met was a lesbian, he was 16 and I was 13. It was the first time I was able to talk about my feelings and attractions to other men. She helped me accept myself and explore things I wouldn’t have otherwise.

Past or present, favorite LGBTQ character or creator in television, film or literature? Please tell us why. I don’t think I have a particular favorite character, although I did love Noah’s Arc when it came it. It was the first time there was a show, as far as I’m aware, of something created for and by us, the LGBT community of color. Now we need something like that for the Latino LGBT community.


How do you stay informed about LGBTQ issues?  By being involved in the community, reading articles on the internet, and the news.

Describe your geographical community.  I live on Mt Washington. The particular street I moved to when I came to Pittsburgh seemed a bit conservative to me. There aren’t a lot of houses in the area and I felt that the community there would be a bit close and maybe they would have preconceived ideas about an interracial gay couple moving into their neighborhood. I was pleasantly surprised when I was accepted pretty much with open arms. It turns out one of my neighbors had a gay son who didn’t live in the area anymore, so they already had a point of reference and I feel very lucky for that.

Describe your local or regional LGBTQ community. There are several communities that I move around in, the communities of color, the activists, the artists, the community at large and the radical faeries, who,to me, encompasses a lot of the other communities. This could be a lengthy description, and I’m not in place where I can spend that time right now. Maybe another time I can take my time and think in depth about all these communities and how they relate to each other in my world.

Have you ever experienced discrimination based on your identity? Specifically, in a job setting, when applying for housing or while in public. Many times, but one of the most salient ones was when I left the army. I moved to the Atlanta area and found a job in a company selling printers and CAD machines. I remember one time my boss, out of the blue, was talking to his partner and said something to the effect that queers were just like killers and liars, the vermin of society. I remember I froze, I didn’t know what to say and didn’t say anything. Shortly after that I was fired.

Are there issues impacting your LGBTQ neighbors that aren’t visible or part of the local dialogue? I think mental health is an issue people aren’t talking about that needs to be addressed. A lot of the things that we go through as LGBT folks affects us in ways that compromises our mental health, yet we rarely speak about that. Another thing is aging and elderly LGBT people, we need to do a much better job of caring for them and making sure they spend their golden years happy and healthy

What would you like to see elected officials do to improve life for LGBTQ Pennsylvanians? They need to pass the non-discrimination act for jobs and housing.

Please share a lived experience, anecdote or fact about life as an LGBTQ person in your community. Can’t think of anything at the moment.

Beyond discrimination, what other barriers create challenges for your LGBTQ neighbors? I believe I’ve covered most of those above.

What LGBTQ friendly resources are available for your neighbors? Not enough

What is your greatest fear for the LGBTQ community in Western Pennsylvania? Division based on race and socio-economic status.

What is your greatest hope for the LGBTQ community in Western Pennsylvania? To come together more often and share in the experiences.

What can allies do to support your LGBTQ community? Donate their time and money.

How can gay men and lesbians support the bisexual, transgender and queer members of our community? Including them and continue have conversations with them.

What motivated you to take part in this project? Sue Kerr 🙂

Finally, what question should I have asked? Please also share your answer. I think you covered just about everything.