We got a jump-start on Lenten fish fries this year when we made a spur of the moment decision to run up the street on Ash Wednesday. So this is a very special edition of Fish Fry Fridays.

Random review of #fishburgh adventures during Lent. Find a fish fry on this Google maps collection. You can also follow them on Facebook and find tons of reviews and suggestions. Here si our general criteria:

We selected this fish fry because it is close to our home, it was one of the few open on Ash Wednesday and they accept credit cards.  We had previously been there so that was a bonus because we were also really hungry and not interested in cooking at the time.

I picked up Laura from the T-station in the snowy cold weather and we drove up the highway to the suburb of Bellevue. Assumption Church is a series of large building including the sanctuary and the school buildings (K-8.) There is a large public parking lot across the street from the church and a sign with a fish, incongruous in the snow perhaps, directing us to the parish hall. It was about a 12 minute drive so that’s useful when you are racing the clock to get fish!

So we trudged through the soft layer of snow and down the steps into the basement where a blast of warm air immediately fogged up our glasses and caused us both to bump into each other and the walls. We then spent a few moments flailing about in the foggy haze trying to find menus and the proper line. It was a strange fusion of winter experiences intersecting with the promise of Spring.

There was a little chaos at the ordering table followed by an extremely well-organized system at the tables. As we left, I noticed some of the event leaders discussing how to better manage the ordering process.  I chuckled as they debated where to put “the swiper” aka the person with the phone accepting credit card payments. 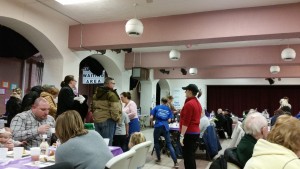 A very well-poised young woman showed us to our table. The hall was about a third full with families and individuals munching on sandwiches. As we noted last year, this church uses lots of students from the Catholic school as escorts, servers and bussers. We were especially impressed by the studious younger students who worked very diligently and with extreme politeness.

Being fish fry aficionados, we had planned our order in advance – 2 sandwich meals, one with macaroni & cheese and one with pierogies, one side of cole slaw and one of applesauce. I also took the plunge and ordered a side of New England clam chowder.  The cost was $22 which is pretty reasonable and almost comparable to the other fish fries. The soup was an add-on, but the price did include beverages.  We donated $2 to purchase some desserts. So $24 for two dinners with drinks, dessert and leftovers. 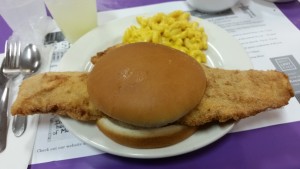 The fish was moist and tender with a very light crust. The portion was huge, completely overwhelming the bun – I’d highly suggest serving on a hoagie roll. We took the leftover pieces home to share with our critters (in moderate amounts), but food waste should be a moral priority for churches in particular. 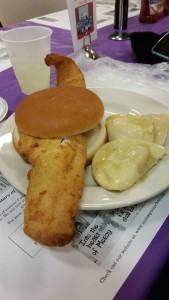 The pierogies were great – light, just a hint of onion and a good-sized portion so we could share. The coleslaw was particularly good, tangy and a nice complement to the fish. Applesauce is applesauce. The mac and cheese was just so-so, pretty much standard fair.

Drink choices included water, lemonade, iced tea, coffee and hot tea. Cans of pop were available for $1. The servers did a nice job getting us started and it was very easy to get a refill.

Much like last year, I would say that the biggest drawback was the lack of engagement by the other attendees. Not a single person spoke to us in a friendly sort of way beyond the servers. This is pretty common at these sorts of events and I find it a significant drawback – if you want to invite people to attend church services or get involved in your venue, you need to post your most outgoing folks on duty to engage people. Say hello, ask about their visit and make a little chit-chat. It can go a long way. The placemats were advertisements for the church, but a little spill when my lemonade was delivered rendered that information useless. 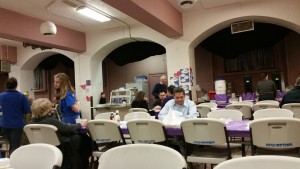 Pros: service, generous portions, variety in the menu, parking and hours, did not run out of food, nice beverage selection, especially tasty coleslaw

Cons: smooth out the entrance/ordering process, interaction with adults, food waste and an excessive reliance on styrofoam

Bonus points for reusable silverware, minus a bit for wrapping them in plastic bags.