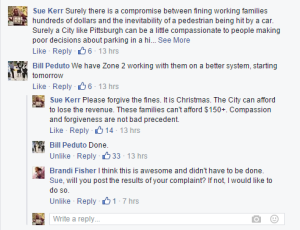 Yesterday, the Marines kicked-off a two-day ‘Open House’ for families throughout the region who wanted to access the Toys for Tots donations. This annual distribution is open to members of the community who have the necessary paperwork and the means to get to the Strip District location, as well as to transport their items home.

Most people find a ride which means they have to find a place to park in the Strip District, a daunting task pretty much any day of the week. Parking ain’t cheap as they say, especially on a weekday morning and for a period of time that can extend to four or five hours depending on the lines.

This year, ‘communication challenges’ about legal and safe parking resulted in 13 people being ticketed and 4 cars towed away while families were in line.

Things got trickier when people complained. Chief of Police, Cameron McLay told local media that tickets and fines would be forgiven in the spirit of the season and that the Zone 2 command staff would be more directly involved on Saturday to avoid further disruptions. Then Mayor Peduto’s office issued a statement overruling Chief McLay and insisting the fines would remain due.

THEN at 11 PM, Mayor Peduto’s office issued another statement clarifying that the McLay holiday fine forgiveness decision would be upheld. Fines and fees forgiven. More importantly, a more organized police presence at the distribution will ensure everyone parks responsibly and no one gets injured in a traffic accident.

I was certainly one of many people who complained loudly about the entire situation. Leveling a $160 towing fee on top of parking citations on people either relying on toy programs OR being kind enough to transport someone who is was a bad decision. I agree people should park responsibly, but I also think that the Marines and the City should have been in front of this with a logistical plan. There are lots of options – put a parking map on the Toys for Tots webpage, have more officers on the ground directing people to park, work out a deal for free or reduced parking at a nearby public or private lot, restrict traffic to create a ‘loading zone’, etc.

Yes, the matter has been resolved and I dearly hope all of the people who received fines and/or had their cars towed will be contacted to ensure they are in the clear. But fixing after the fact doesn’t undo the harm caused by the hateful and ugly comments – from Pittsburgh residents – in the comments section of the various media stories reporting on this situation.

“If you have a car, do you really need free toys?” is the least offensive and ridiculous.

We have witnessed what happens when hate strikes a blow – from the xenophobic attack on a taqueria in Brookline to the racist graffiti at a downtown barbership.  This is Pittsburgh in December 2015. Reading the comments in all of these associated articles is an exercise in heartbreak and despair. The vitriol directed at neighbors who access charitable programs while having the audacity to own (or borrow) a car is horrifying. Our leaders – elected and private – have to do a better job pushing back at the attacks on poor people. We simply must.

The City made a mistake in how they managed the original problem – granted, they had legitimate public safety concerns to address, but someone should have ran this by Sonya Toler before unleashing McCann-Chester tow trucks. The City made another mistake when they refused to waive the fees. It didn’t help that the Mayor, County Chief Executive and assorted political leaders were at a fancy schmancy upscale Pennsylvania Society weekend in NYC while all of this was going down. An event also attended by Presidential hopeful Donald Trump, but skipped by Democrats like Tom Wolf and Ed Gainey who are focused on the state budget impasse.

Now the City has fixed those errors and will hopefully be much more proactive in responding to the human services elements of public safety moving forward. I know that Toys for Tots isn’t the least bit responsive to constructive feedback so hopefully we can count on the community to continue making this process dignified, safe and respectful.

For the record, I did tag the Mayor in a Facebook post and he responded within minutes. I was pleased. I also feel embarrassed to have tagged him in the middle of his own event, but his media folks long ago stopped answering my email inquiries. That’s for another post. So I’m getting a lot of credit here which is probably undeserved – I’m confident other people raised serious concerns about these decisions. It certainly wasn’t just me. But I’m happy to lend my voice to a worthwhile outcry.

Last year, I was part of a team using the hashtag #PghSavesXmas, something I swore never to do again. I wrote this as I reflected on the project:

We have a tendency to reduce poor children into caricatures of Tiny Tim, the poor, crippled orphan waif who needed to be saved (he wasn’t an orphan but when did accuracy stand in the way of anything?) We are brought up on this mythology.

I hope this incident reminds all of us potential white middle class saviors that the change we need starts within ourselves as well as the systems we hold so dear. Mayor Bill Peduto doesn’t need to be defended around a poor decision that someone on his team made in his absence. We know he’s not a bad guy. But, like Scrooge, he and his City leaders have the ongoing capacity to learn and grow, to be better and to acknowledge that they have chosen to be part of a very flawed system that sometimes (often) fucks things up for vulnerable people.

So please stop defending the Mayor and his team. They are going to be okay. Take a little of that energy and use it to defend the people being ripped apart by our neighbors for the crime of being poor. That’s where your energy is needed, that’s who needs your support now. The Mayor is fine. He did the right thing and we can move forward together to address the underlying serious issues that created this maelstorm in the first place.

And like Scrooge, we can engage in a lifelong process of growth and change. That’s part of the leadership deal.