Last weekend, we were striving to raise $3500 for the memorial bench to honor Andre Gray and his dog, Boss.  Honoring those we’ve lost is an important ritual in our society, almost a necessary part of the healing process. This really powerful piece ran in the Post-Gazette Pet Tales column. 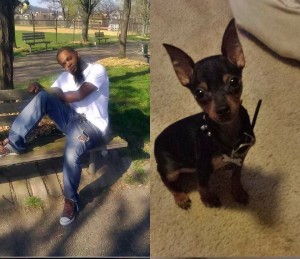 Boss — who was not yet 1-year-old — was a happy and much-loved puppy. Almost everywhere that Mr. Gray went, Boss was at his side or in his arms. On Oct. 25, when Victoria Gray Tillman went looking for her son, she found blood on the floor of his ransacked apartment. He was gone, and so was his little black-and-tan dog. She called police.

Five months later, police notified her that her son’s body had been found in the Ohio River in Steubenville, Ohio. Mr. Gray had died from a gunshot wound and the death was ruled a homicide. Boss’ body was never found, but Ms. Gray Tillman said police told her the dog’s blood had been mixed with her son’s blood in the apartment.

While we didn’t quite hit our goal on the actual date of what would have been Andre’s 35th birthday, something very wonderful did happen – people sent checks in to Bloomfield-Garfield Corporation which is the fiscal sponsor for the fundraiser. More than $600 worth of checks, so we are now on our way to beginning the installation process. We can start ordering the bench and the plaque. We are using the City approved designs to expedite the installation – Andre’s mother and godmother have specifically asked that it be ready to dedicate prior to the anniversary of his death in October. We’d love to tap into our artists and craftsman supporters to design something creative, but that requires a lot more levels of approval so we’ll consider that in the spring.

We still hope to raise another $1400 to help with expenses such as planting flowers around the memorial and to help us sustain the memorial. In partnership with Pittsburgh Printing Press, we will produce a limited edition dog leash in the colors of the bisexual pride flag and embossed with the phrase ‘Walk Like a Boss’ to benefit the ongoing maintenance of the memorial. Please consider a modest donation to make this possible.