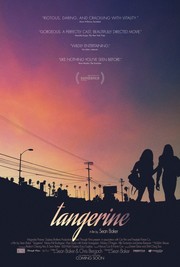 Last week, Ledcat and I decided to catch the indie-film ‘Tangerine’ at The Harris Theater.

The film follows two trans women during the course of one Christmas Day in Los Angeles. Alexandra and Sin-Dee are best friends with aspirations, hopes and lots of street smarts. Sin-Dee is on a quest to track down her erstwhile fiance, Chester, and one of his other female friends while Alexandra is preparing for a singing performance that evening.

The leads are terrific. Their chemistry is palpable and their relationship is the true joy of what is otherwise a sobering and sad glimpse into the character’s lives. Sin-Dee’s fiance/pimp is a classic jagoff with little in the way of charm or redeeming qualities. Alexandra’s friends let her down in the way that shouldn’t be shocking, but feels painful.

What resonated with me was the tapping of their shoes as they walked – everywhere. They walked miles, so many miles in those big luscious shoes and didn’t think twice. The determination and unrelenting sound of those footsteps was unmistakable.

Of course, there’s a heartwarming scene but it isn’t particularly uplifting given the circumstances (no spoilers.) The pathos of the supporting characters in the final scenes reminded me a bit of the ending of ‘Magnolia.’ It rips away the illusion that love, sex, recreational drug use or even familial ties can  replace the simple bond of loving friendship between two people.

I told Ledcat as we left that I found the movie to be trans positive and that’s primarily because the director cast two trans women as Sin-Dee and Alexandra. I was excited to see trans women portraying trans women. That felt good and right and worth supporting. Kitana Kiki Rodriguez (Sin-Dee) and Mya Taylor (Alexandra) were not professional actors when cast. They did a great job.

The movie drags a tad bit especially during a pivotal scene featuring the entire cast. The sound editing needs some work – I had difficulty understanding the dialogue in several scenes. But the shots are gorgeous and gritty. The film is not so much an exploration of transgender identity as a fast-moving glimpse into the comedic and lonely moments of two women seizing life.

Catch this film while you can. You won’t regret it.