I’m going to share my thoughts in a four-part series, built around four distinct events – a face-to-face meeting with Pridefest organizers, a community town hall meeting organized by Roots Pride organizers, the protests at Pride in the Streets on Saturday evening and, finally, Pridefest itself on Sunday. These are events I personally attended/witnessed as a middle-aged, white, cis gender lesbian identified woman with middle-class privilege.

Read Part One and Part Two.

I have never been to Pride in the Streets. I don’t like crowds, especially crowds filled with people drinking. I am not a huge fan of live music and I don’t like to stay up late, so acts that come on stage after 8 PM are not my cup of tea. Thus, there has never been any appeal to me. I did one time purchase tickets for the VIP section at The Toonseum to watch Chaka Khan, but Delta was not at all easy to work with in regard to accommodations for disabilities so that didn’t work out – I gave my tickets to a friend. (Disclosure – I’m a little bitter about that.)

This year, I was determined to go because I wanted to stand in solidarity with the Roots Pride protestors. We kicked off our evening having dinner with Jim Fischerkeller, one of the father’s of the modern LGBTQ community in Pittsburgh, and then we headed Downtown to the intersection of Ninth and Liberty (near the big parking garage.) We arrived a little past 9 PM and found a handful of religious rightwing protestors from Repent Amarillo speaking into the throngs of Pride in the Streets attendees. On the other side of these folks was a quiet line of people of color, white folks, youth, elders and allies standing hand-in-hand across Liberty with their backs to Repent Amarillo and Pride in the Streets. They rejected all of the messages. They stood firm in the moment. 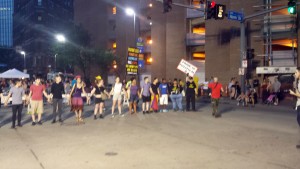 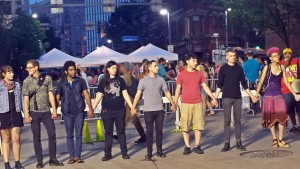 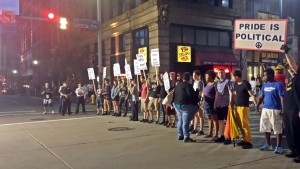 My friend Andy came in from NYC to observe the protest and show solidarity. He and Ledcat stayed on the sidewalk observing while I darted around taking photos and talking with people.

After awhile, Roots Pride volunteers showed up with gorgeous (really!) signs and banners to share. That’s when things got a bit lively – the indomitable Celeste Scott was on the mike encouraging people to chant and talk and altogether keeping the energy level roused, but not out of control. The group eventually circled up to talk amongst themselves and plan their actions. For the most part, they stood in solidarity with their signs, talking with passers-by as well as the police and people attending the show. There was almost zero engagement with Repent Amarillo who seemed to pick up on the futility of that approach and kept their spew of hate focused on concert goers.

The atmosphere was intense, but relaxed. The Pittsburgh Police were in full force with Chief McLay and Commander Lando on the scene for most of the evening with bike officers and others. The officers kept traffic flowing and seemed to be respectful of the fluidity of the event. 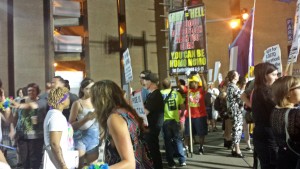 Being so close to David Grisham and Repent Amarillo was weird for me. At one point, I was standing directly next to him as I spoke to a third-party. I turned around and caught two young queer women wearing great outfits and asked them if I could snap a photo. They thought I was with Repent Amarillo. I was horrified and amused at the same time. Fortunately, my lesbian friends Faye and Diane were nearby to vouch for me. I will definitely wear a more political tee-shirt the next time I attend any such gathering. It was a funny mistake given who I am as a political blogger, but it was somewhat jarring to realize I could look like a hater. Of course, I could. Ugghh.

Back to Roots Pride. Their protest was joined by folks from the Stagehands Union and by What’s Up Pittsburgh? and others. And basically they stood in silent witness to their message. They did some chanting “Whose Pride? Our Pride”    … but what really resonated with me was the diverse hands clasped across Liberty Avenue.

The crowd heading into the concert seemed to be mainly young white women, giggling about Nick Jonas. A lot of people came down to witness Roots Pride – the intersection was jammed with familiar faces from other protests, other outpourings of community, other queer and trans activities.

Repent Amarillo caved first. They tucked their hateful signs under their arms and walked away into the night, gearing up for Round Two at Pridefest proper the next day. It was viscerally impressive to watch them leave, a moment of triumph for all who are tortured and brutalized in the name of Christ Jesus. More on them in the next post.

Roots Pride rallied into march formation and took to the sidewalk, marching and chanting “Gary Van Horn, You’ve Been Warned” as they strode to their next destination – a celebration at the Renaissance Hotel. We briefly contemplated heading down that way, but I was exhausted and didn’t have another activity in me that night. There was still work to be done the following day, so we headed to the parking garage and then home.

A powerful moment for me personally – the moment everything changed  – was when Harrison Apple handed me their sign. They have to head down to the after-event location to do some planning. Suddenly and without much conscious thought I went from observer to participant. I held a sign someone had taken pains to create. I shoved my camera into my pocket and thrust the sign high up into the night to remind myself and everyone else that I am more than a lesbian blogger chronicling and analyzing – I was here, queer and pretty pissed off. I forgot about Andy and Ledcat, I forgot to take more photos, I forgot to eyeball the religious right. I was not an outsider looking in, I was part of the action. It was a refreshing jolt, reminding me why I was there – why I had been present at other activities during the week.

This was a powerful experience for me. I was literally invited into the protest and could almost feel a searing jolt of connection with those present. This was an experience I craved – the dissent, the unity, the calm, and the resistance.  I felt some of my own resistance melt away as I surrendered to the reality that not having a plan did not take away from the power of this action.

I didn’t stay that way long. My friends’ 15 year old son was eyeing up the protest with a familiar gleam in his eye so I offered him my sign and waved him into the circle. He eagerly accepted and soon was lost in a sea of queer people embracing and welcoming him.

He and I were both exactly where we belonged.

While it may be safe to assume a lot of the revelers had been to Liberty Avenue before to party at a bar (assuming they were old enough), I had to wonder how many of them knew about ‘The Stroll’? How many had been to events or exhibits at The August Wilson Center? How many caught or transferred buses along those blocks? How many grew up in Pegasus or knew exactly why it closed? How many shopped in businesses located along Liberty Avenue? I wondered if they realized how unique this very location was for the intersection of race, gender identity, economic status, and sexual orientation?

Are any of us really conscious of the bigger issues right under our feet? 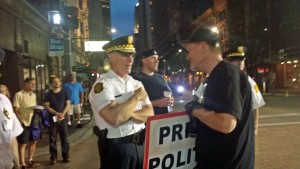 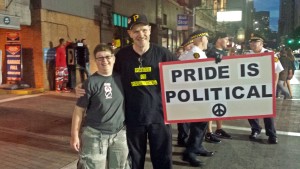 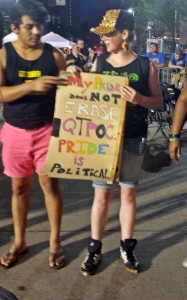 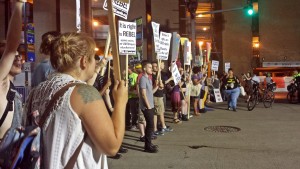 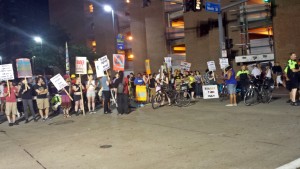 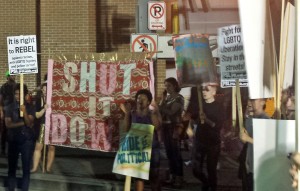 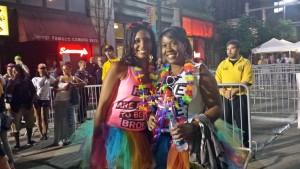