Yesterday the delightful local lunchtime eblast Eat That, Read This referenced an issue near and dear to my heart – LGBTQ visibility among municipal and other governmental workforces.

mayor peduto’s administration noted for being diverse. not mentioned in this piece: how many awesome staffers, at all levels, are gay!

Adam his the nail on the head – it isn’t being mentioned that gay people (or LBTQ people) work for the City! or the County! or for State elected officials! 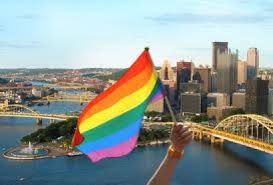 As I mentioned a few weeks ago, a member of the Administration told me that 40% of recent hires and appointments have been LGBTQ folks. There’s no way to confirm this. And while I am absolutely willing to accept and celebrate that they are awesome, I’m not sure we can just believe that they are all LGBTQ  (or gay?)

Jase Peeples at The Advocate has a terrific piece on this very topic – how visibility in entertainment matters.

Of course I completely understand resistance to LGBT people being pigeonholed as LGBT first and an artist, athlete, politician, or anything else second. But there’s a difference between being referred to as an LGBT person and a person who happens to be LGBT. Including how we identify doesn’t necessarily overshadow our accomplishments or talents. However, it does fight negative stereotypes by providing solid examples that queer people come from all walks of life and can accomplish anything our heterosexual and cisgender counterparts can. By negatively reacting to the inclusion of how a person identifies — or refusing to answer at all — we run the risk of entering a new closeted age; one where queer youth learn that proudly proclaiming who they are is “reductive” and there’s no need to come out because it “shouldn’t matter.”

Except it does matter.

Yes, it does matter. I support people having a right to privacy and leading discrete lives as much as they want/choose/need, but this still leaves a need for the City of Pittsburgh and other local government bodies to hire publicly openly LGBTQ people. There’s no reason they can’t do both. There are lots of reasons why it matters that they try to do both – the current model isn’t working. If the workforce culture is still inhospitable to people using identifiers, that’s all the more reason why we need people willing to be the first openly gay director or trans deputy solicitor or bisexual manager.

Because the battle for LGBT equality won’t be won when we allow ourselves to be invisible. Being invisible or allowing people to misgender us or letting others tell us that our sexuality doesn’t need to be “flaunted” didn’t get us to where we are. Omitting our identities because we’re told it’s “reductive” or “doesn’t matter” didn’t get us marriage equality or end “don’t ask, don’t tell.” Instead, true acceptance and equality will be won when being gay is a characteristic that can be mentioned every time and no one bats an eye.

The more I have this conversation with all sorts of people, the more convinced I am that this is a reflection of the tension between the equality paradigm and the liberation paradigm. Equality does require someone to be hired regardless of their sexual orientation. Liberation requires them to use that privilege to liberate others.  While the Peduto Administration is – I believe – fully committed to LGBTQ equality, they can’t push through to this next level without the inclusion of publicly open LGBTQ senior staffers and appointees.

2) The Mayor of the City of Pittsburgh will develop and maintain a database of the age, sex, zip code,
and optional demographic information, including race, sexual orientation, and disability, of:
(a) Each individual that submits an application for a City board, authority, or commission and
(b) Each appointee to all City boards, authorities, and commissions.
This information shall be tabulated in the aggregate for each board, authority, and commission, and made
public via a report to City Council on an annual basis

I applaud Adam of Eat That, Read This for pointing out that the contributions of LGBTQ people are necessary and valuable for municipal government to effectively meet the needs of LGBTQ residents. He’s right – we should celebrate their awesome! That simply requires more visibility.

Meanwhile, here’s the link to apply for current openings on boards and commissions.  And you can find current job openings here.

We’ll be revisiting this soon, talking with some national voices on the concept of outing and visibility.