Last night, Bill Peduto made his first official Pridefest appearance as Mayor at OUTrageous Bingo. He came in looking very relaxed and comfortable in a blue bowling shirt and took the mike like a pro. He acknowledged the longevity and importance of Bingo, Shepherd Wellness and the Gay & Lesbian Community Center. He called a few games, gave away some prizes and was on his way to his next function. Meanwhile, members of his team were playing madly away in the back of the room. 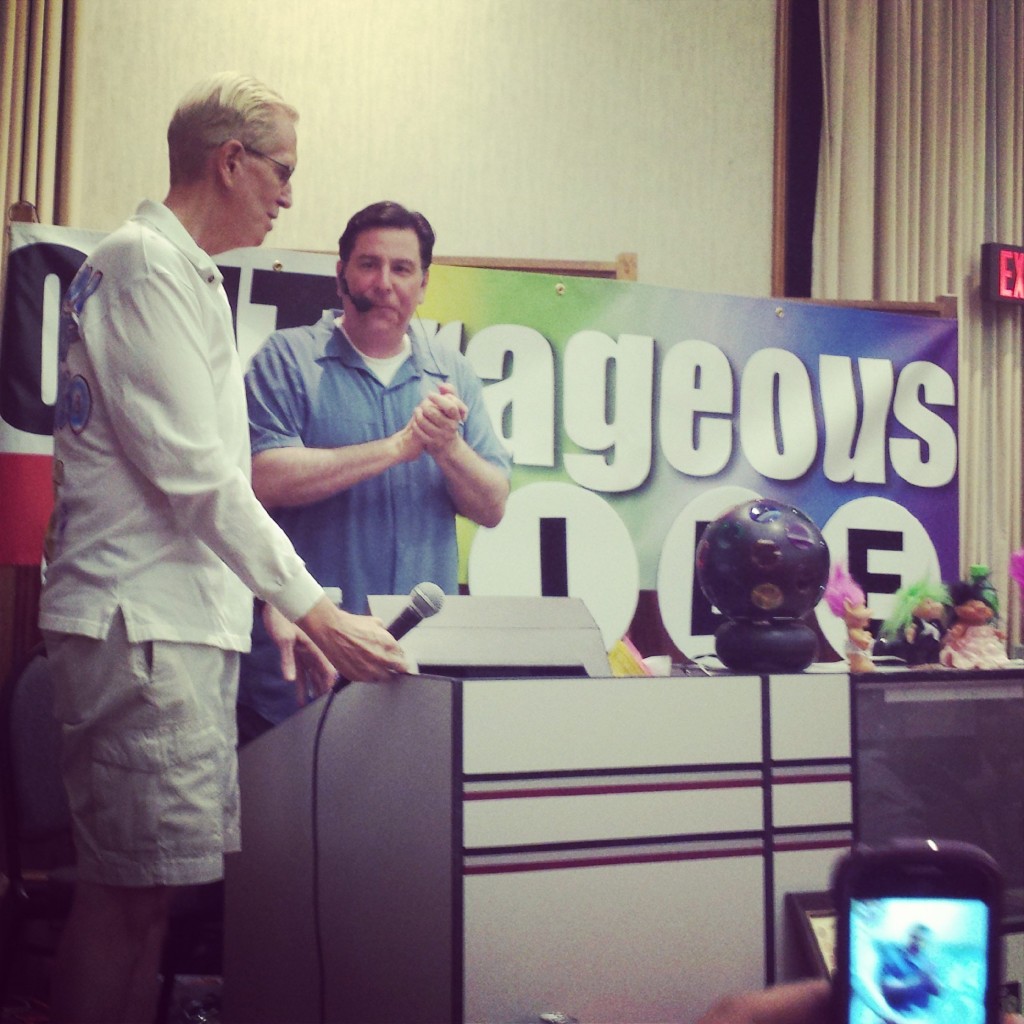 I’ll be honest – I suspect the Mayor is not happy with my expression of disappointment so I keep my distance when he’s at an event that benefits or hosted by an organization I value. I may be disgruntled, but I don’t let that impact organizations I care about or they people that they serve. I can bow out and wait my turn to have a discussion.

Last night, I walked up took photos while he was on the podium. It was the first time I’ve seen him in public that he didn’t say hello to me.

That stung more than I thought, even though I expected it might happen. He was in a hurry, he was doing something that mattered to me and I can’t know for sure he knew I was there. He hit every note I hoped he would. Nothing for me to complain about.

My disappointment still runs deep into the lack of action on municipal equality and the face that it has been three weeks since marriage equality became the law of the land and there’s no response from the Mayor’s team on the local impact. I think that’s a valid and fair criticism of his decision not to act, one that I don’t understand.

Still, I wrote this:

I was disappointed, but not surprised to read that Mayor Bill Peduto is conducting a mass wedding at PrideFest. That’s the completely predictable thing to do. And it isn’t inherently a bad thing except he hasn’t done anything for the rest of the LGBTQ community since he became Mayor. So it feels far from sincere or genuine that his team is going to organize a wedding for gay men and lesbians while simply ignoring everyone else. It also feels sort of unfair that he’s prioritizing gay men and lesbians at the expense of the rest of us.

I understand the appeal and I’m sure there will be a measure of satisfaction presiding over such joyful moments. I wouldn’t begrudge him that. I just wish he hadn’t selected this as his opening act toward municipal equality.

I was wrong. The Mayor described plans for the Pride day weddings and it is clearly not a “mass wedding” (no pun intended.) He’ll conduct each service privately in his chambers with only the presence of family, then after all of the weddings are completed they will walk down (a “wedding march”) to a local hotel for a champagne reception.

I should not have assumed that this would be a gaudy spectacle and I apologize to Bill Peduto for that. It sounds like he’s arranged a tasteful celebration for people to whom Pride matters and that is a rather lovely thing to do. The event is all donated by local Pittsburgh businesses.

Now I stand by my critique that the Mayor should be more aggressively addressing municipal equality and should be prioritizing his own employees regarding the Domestic Partner Registry and our future benefits rather than weddings. I’m not letting go of my skepticism and bewilderment over that radio silence. But I’m returning to my earlier, less jaded stance that it is my job as a blogger – and yours as a resident  – to help build Next Pittsburgh by asking questions and holding him to his pledge of transparency.

I judged the wedding plans by their cover (“group wedding at Pridefest“) instead of the character and leadership of Bill Peduto that I’ve known for years. That was a mistake on my part and I regret allowing my own fears and anxiety about our future color my analysis of his decision.

When I was sitting in that room of 500+ LGBTQ folks and allies of all ages and subgroups within the community, I was struck by how comfortable and at ease our Mayor was talking with a room filled with us. Of course, he is. He always has been. And of course he made his first action during Pride a supportive one for the two regional community centers – Shepherd Wellness and the GLCC.

So I experienced a surge of regret that I had jumped to conclusions coupled with a surge of hope that maybe there will be some progress on the municipal issues. When your Mayor comes to an event and is able to recite the Twitter handles of the participating organizations, he’s clearly prepared. And if he’s prepared, he has an investment.

Mayor Peduto – Bill – I am sorry I jumped to conclusions about wedding plans and used that to beat you up about municipal equality. That was an unfair way for me to make my point and I am very sorry.  I allowed my frustration and anxiety to cloud what I know to be true of you and that was a cruddy thing to do. I will do better moving forward.