I didn’t go looking for this fight. Honestly, I just wanted to enjoy a Pittsburgh tradition – Art All Night. I had planned to review this event with some gentle mocking of the hipsters and yuppies (oh, so many strollers) and then talk about the interesting art.

Instead, I am under siege from gun rights activists who  I must say include a pretty mean bunch of people who have no interest in reasonable discussion.

Let me back up.

Art All Night is an “open all night” art exhibit by community artists. It has a quasi-guerrilla art, quasi-family friendly sensibility. It is usually in a reclaimed space, like a warehouse and features lots of art, musical performances and activities. It is very grassroots and much beloved.

Event sponsors include the Pennsylvania Council on the Arts, Port Authority, Children’s Hospital of UPMC, and the Lawrenceville Corporation.

I’ll be honest. I attend this event because it is something Ledcat likes to do. It is a bit too disorganized and chaotic for my personal taste and sometimes it can be a bit too precious. I typically look at some art, go sit down to listen to music, look at more art, rinse, repeat. It works for me. I like to people watch and run into old friends. So this year we opted to go early – around 5:30/6:00 to minimize some of the intensity  – finding parking is a nightmare for this event.

There was a sort of random check of our bags for alcohol and in we went. It is a very industrial space with art tacked up on plywood in various sections. Some of the art is really interesting, some of it is just “meh” and some of it rather provocative. The organizers lay out the space pretty well and do a good job labeling the ‘adult’ section.

The activities for kids are intense and everywhere and so are the kids. Lots of kids. Mostly white kids under 10 wearing everything from pink tutus to pajamas. But there is simply so much for them to do that it works. And I am always happy to see kids having access to art – did I mention this event is free? I saw the usual Lawrenceville event suspects and only had 3 awkward encounters.

While Ledcat made her final rounds looking at the art, I went to sit down and listen to a mandolin player. I was puzzling over the probability that the two girls making friends in front of me *really* were both named Luna when it happened. A volunteer with the event walked past and I saw what I thought was a gun stuck in the waistband of his jeans.

I got up and walked after him because I wanted to be sure – perhaps it was something that looked like a gun. Ledcat followed me and we got close enough for me to take photos and for her to confirm that it was a gun in what appeared to be a clip type holster inside his waistband.

A volunteer at a kid-friendly event open carrying a handgun. In Lawrenceville. Surrounded by the children of most of the progressive Democrats in the region, many of whom are ardently anti-gun.

Being dutiful, I walked up to the volunteer table and asked to speak with a supervisor. That person confirmed that they knew there was a volunteer with a gun and it was being handled. I stood there weighing my options. I decided that I wanted to leave. I had had enough of gun violence this week with the video Alaska Thunderfuck made parodying shooting a trans woman in the head. Ironically, Alaska’s drag troupe has its origins at The Blue Moon, a bar about ten blocks away in Lawrenceville.

I posted this photo on social media with a question for the event.

So … I don’t think this is really adequate or accurate, but the event is still underway so I’ll hopefully get a more robust response from them in the next 24 hours. And others have shared responses from AAN that were more detailed including expressions of gratitude that they sent “private” messages. I did go to the volunteer desk, AAN, where you had the chance to resolve it privately. That’s on you.

As you might imagine, the fact that I raised this question has generated some push back from the gun folks. The usual array of insults have been hurled – I’m paranoid, a “libtard”, ignorant, stupid, a victim and also, of course, chose to be a lesbian. People seem to be under the mistaken impression that the fact that Pennsylvania has an open carry “right” is a sufficient explanation. It is not. Volunteers are often required to adhere to certain constraints that the general public (or event attendees) do not.  The clearest example is requiring volunteers to abstain from drinking alcohol while “on duty” even though they are of age and alcohol is legally being served. Telling volunteers that they cannot bring weapons to an event (or openly display those weapons) is perfectly reasonable. Because the volunteers can choose not to participate if they find that constraint onerous.

Frankly, if a volunteer showed up openly carrying a gun at an event like this, I would question their judgment and send them and their gun packing. I wouldn’t ask them to put the gun away. I would ask someone to put away their cell phone. A gun? But I have no idea whom this man is or what role he plays or why on earth he made this choice. Maybe he’s an organizer or an artists or a donor? 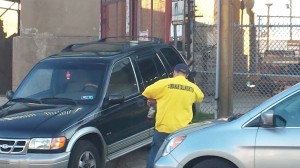 What’s really interesting to me is the fact that my asking a politically-charged question about an art exhibit is considered taboo or verboten. Some of the exhibits were pretty – well, I can’t post the images on Facebook. I wonder if they would consider a pro open carry gun entry?  But still WHY does someone need to openly carry a gun at this type of event? WHY? WHY? I know that they can, I get it. But WHY?

Regardless, the conversation on Facebook quickly deteriorated into a screed about the Second Amendment and willful ignorance of the actual issues. Art All Night says they will consider the public input for next year – as of right now, more people are defending this man than are expressing concerns about his decision to open carry his gun. I hope there is a robust discussion and the organization looks at the bigger picture (ha, pun!)

I also hope Pittsburgh progressives will take a step back and consider that this could happen again at any of the local events unless the issue is addressed ahead of time. Lawrenceville was one place mentioned in a recent NYT article about how awesome Pittsburgh is because it fuses the old and the new. Lawrenceville is hipster meets working class family. Is a gun toting white middle aged man hipster or working class or someone entirely new? What if someone walked into Art for Change (formerly Art for AIDS) carrying a gun on their hip? What about Pride? How about Black Pride? Or the Arts Festival? Or … what would it mean?

And Children’s Hospital has a very strong investment in this issue – they are the place that sees first hand the devastating impact of gun ownership gone awry on children.

My takeaway is that I need a better understanding of gun laws in PA. It is worth noting (to me) that my FB friends who are licensed attorneys seem pretty up on it, but came down on the side of “being legal doesn’t mean it is a good idea or appropriate.” And a lot of people have completely ridiculous ideas of the concept of an undercover cop and so forth. Much like the misguided belief that the police can shoot to maim (or that they are supposed to do that) warps public perceptions of shootings.

Art All Night is a perfectly fine event. I still think it is a bit pretentious and precious and certainly chaotic, but my overall impression hasn’t changed that much because of this incident. I’m disappointed that it was overwhelmingly white – white folks of all ages, but definitely middle and upper middle class white folks with a sprinkling of the working class hipster liberal arts crowd. That’s not surprising, but a reflection of Pittsburgh right now.

And, seriously guys, if you would address the parking debacle, you’d probably attract a more diverse crowd.

A few photos of things that captured my interest last night. The lighting was terrible so forgive that. 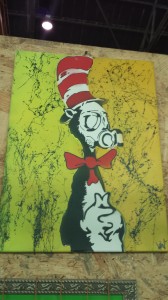 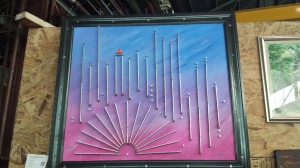 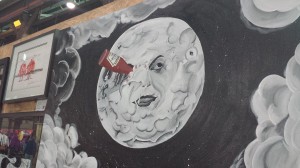