Earlier this week, LGBTQ folks and allies across Texas gathered in vigil for the two women and solidarity with one another.

GetEQUAL TX’s Cd Kirven, who organized the vigils, told those who gathered in Dallas that she wanted to hold LGBT-affirming memorials to honor how the couple lived. At a family-organized vigil in Houston last week, Kirven said, LGBT mourners were told that if they didn’t change their ways, the same thing could happen to them.

I’ve spoken with Cd a few times and they expressed to me that there is a lot of fear in Houston and throughout the state – fear rising from the family violence and the limited resources Texas has to offer young people. According to Lone Star Q editor John Wright, there are only 5 youth centers in the entire state.

I understand family rejection – the majority of my family, especially cousins near my age, stopped talking to me years ago. But while it hurts and impacts my desire to interact with any family members, I don’t have real fear of actual violence. There’s only one person I believe capable of it, but I’m not in contact with that person. For me, there is an emotional toll of any family gathering, but I am fortunate enough to not be dependent on them for my day-to-day life. But that could change, couldn’t it?

Britney lived with her grandmother when her father was released from prison. She was her caretaker. We don’t know how her father ended up living there, but his presence would certainly have an impact on her. It is unclear where Crystal and her daughter lived, but reports indicate that she was the primary caretaker for her father after he recovered from a heart attack. It is even more heartrending to realize that both young women made sacrifices to take care of their elders and were still rejected and reviled. What a complicated dynamic and one fraught with so many unknowns.

But to suggest at a vigil that young queer people of color should change their lives to avoid being murdered by their own family members … that I don’t understand and I don’t think it is acceptable and I find abhorrent.

OUT has a piece called “When Black Lesbians Are Killed By Black Men” writing about a 7-year-old incident in which two lesbians of color were also murdered by a family member (the estranged ex-husband of a sister.)

But the murder of Shani and Ray-Ray illuminated a particular type of everyday violence that is both racialized and gendered, a type of violence that evidences the consequences of sexism and homo-antagonism precisely aimed at black women (who love other women). Shani and Rayshon’s case centered much-needed attention on the violence inflicted upon black women, especially lesbians, by presumably straight black men. We black queer men are prone to committing similar violences, just as well. But what does justice look like for black lesbian sisters, who daily fight through racism and much else while seeking to protect themselves from the violences that are inflicted upon them by their black brothers, lovers, fathers, friends, and others?

Cd has opted to respond by raising money for Crimestopper tip fund and raising the profile of other unsolved cased of brutal violence against women of color (some queer, others not.) They told me that the tip that led to Larry Cosby’s arrest may have come through crimestoppers, something that emboldens them to pursue that avenue – they have done an amazing job juggling media requests, organizing vigils and trying to support people grieving over wounds both old and new as they wrestle with this latest tragedy.

Nadine Smith with Equality Florida also responded by designing an image to allow people around the country to participate in the vigils. 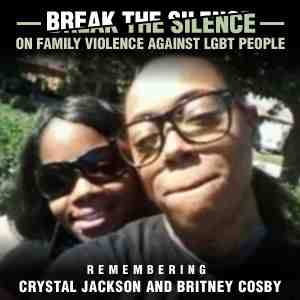 I go back to the OUT piece and realize that for queer women of color – of course it isn’t so simple or easy. This very week in Pittsburgh, the civil trial against 3 police offices who allegedly assaulted a young black male, Jordan Miles, is filling social media with vitriol and reminders that walking while black can be held against you (and beaten against you, too.)  Monica Jones in Arizona has shown us that walking while trans and black can have dire consequences. As I’ve written these past weeks, just being a person of color in Pittsburgh subjects you to all sorts of Facebook-sanctioned debasement. And it was just January 2013 that we gathering in the South Side because two local queer women of color were assaulted by men of color in a local bar.

But contrast that with our own City Councilman and Reverend and man of color, Ricky Burgess, who won’t sign a Pridefest proclamation because it promotes “promiscuity”.  In the words of his Chief of Staff, Shawn Carter:

Is it wrong for a man who has spent the last 30 years teaching men and women, gay and straight, young and old alike that promiscuity is dangerous and that the sexual should be confined to committed relationships and is he wrong for refusing to sponsor an ad in a publication which advertises some level of promiscuity?

Reverend Burgess hasn’t sponsored any ads in any publications that depict heterosexual promiscuity, either. So is being universally anti-promiscuity somehow tantamount to being bigoted?

Do either statements sound remotely queer-supportive? Pride doesn’t promote promiscuity, that’s ludicrous. It does celebrate sexuality and doesn’t shame people who don’t chose monogamy (or those who do.) Those are different things. You can’t turn around at Pride without being handed a complimentary condom. And by that I mean that there is a great deal of information and outreach taking place around sexual wellness and education. It is probably one of the most important education and outreach days of the year precisely because it draws so many people who are otherwise not being offered complimentary condoms, right?

He’s a man of color in a very high profile role and yet he sends a narrow, judgmental message to queer people of color and all people. To be fair to Councilor Burgess, I do not know if he’s a supporter of Black Pride which takes place in July most years. I’ll be sure to find out. I think it matters.

But I digress. I am going to continue to explore these issues and try to get good information on what is happening in Pittsburgh. I just think with what limited information I do have, it is not-so-clear to what extent family violence is impacting the community. And it is something to keep in mind as our elders continue to age and may turn to family for their day-to-day needs.

What does justice look like for our black lesbian sisters, to quote Darnell Moore the author of the OUT piece? I believe that those of us who are white and queer should probably start asking them and offering our support to build this more inclusive, more just Pittsburgh.