It is a little disheartening to realize that several more of my friends “liked” this page (although one told he is monitoring the enemy – ahem, okay.)  You can look at the page without liking it. I wonder if they realize this fact?

But even more disheartening to see this transphobic meme moved back up after apparently being removed by Facebook: 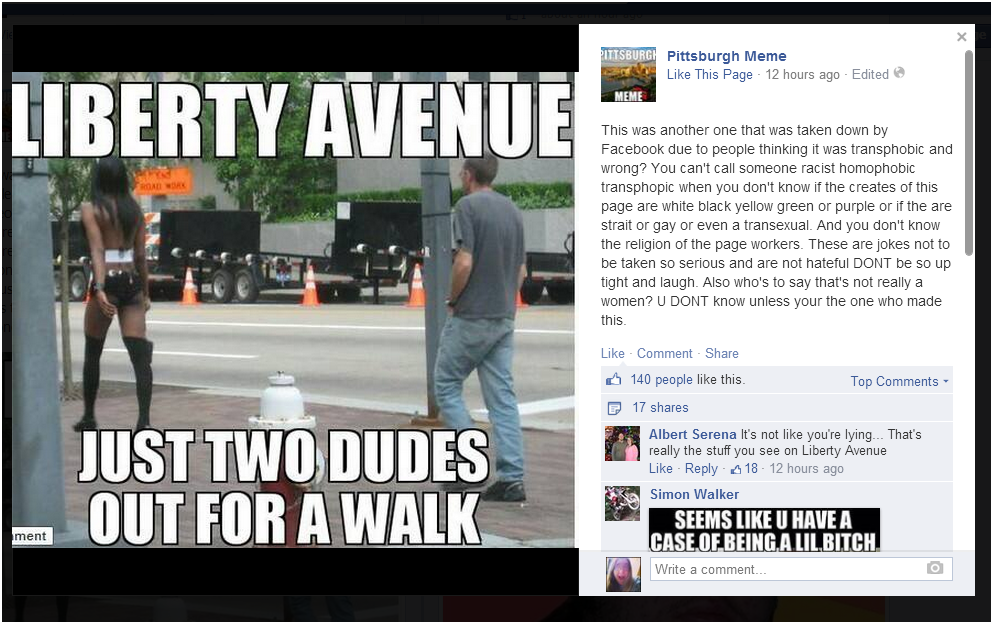 This is what the (anonymous) page owner writes:

This was another one that was taken down by Facebook due to people thinking it was transphobic and wrong? You can’t call someone racist homophobic transphopic when you don’t know if the creates of this page are white black yellow green or purple or if the are strait or gay or even a transexual. And you don’t know the religion of the page workers. These are jokes not to be taken so serious and are not hateful DONT be so up tight and laugh. Also who’s to say that’s not really a women? U DONT know unless your the one who made this.

First, there’s the irony of lashing out about not knowing people’s identity when you hide your own identity. If you are so proud of these “jokes,” why not attach your name to them?

Second, yes, we can identify a meme or a post or comment as transphobic, racist or homophobic by the content. That’s not subjective – belittling the people in this image based on their perceived gender identity is transphobic. Period. Creating this meme is transphobic. Period. As you can see from the comments, some self-identified gay people think it is funny. That doesn’t make it not-transphobic. It makes that gay person transphobic. There’s no absolution from hate by saying “I have a gay cousin.” 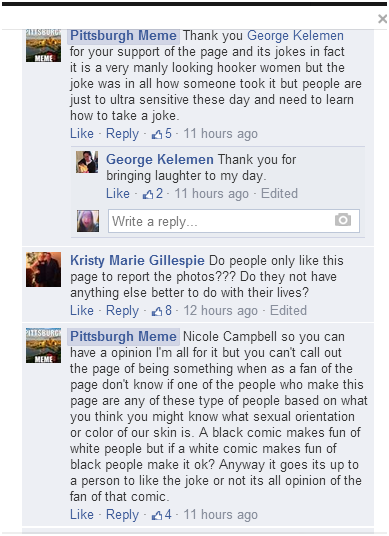 Third, the actual identity of the people involved in this image doesn’t alter that fact. That’s sort of the point of calling out transphobia – in fact, Creator-of-Pittsburgh-Meme, you don’t need to know that information to recognize that this is mean-spirited and hateful. It is not open to interpretation or opinion.  I think the comments about race speak for themselves about the real sentiments of the people involved.

There are folks in the LGBTQ community who use this same approach to respond to being reported to Facebook – they blame people for “telling” on them instead of taking responsibility for violating the FB rules. They want to use the free site, but not follow the rules and then get defensive when that doesn’t work out for them.  Rarely do they acknowledge that the content didn’t belong on Facebook, they just blame other people and create this passive-aggressive frenzy of a witch-hunt for the person who used a legitimate tool to report offensive content. And I bet some of those folks would want to report this, right? So think twice before you go on the little rant again. And please stop claiming you know who reported you. You don’t.

It makes me sad and angry that in 12 hours, the post had over 140 likes and was shared 17 times. Here’s how the hate spreads

The response to this has been low key in spite of thousands of visits to my original blog post. Several people (white folks) have told me that this is not “their Pittsburgh” and many, many others (like the Mayor’s staffer who liked the page) just ignored my email. I haven’t heard any of the folks who ‘celebrate Pittsburgh’ go out on the limb and condemn this.

The problem? This is Pittsburgh. The page has gained over 4,000 likes in a week. That’s 24,000 likes in 34 days. That’s a lot of people who think this stuff is okay. And quietly agree with the social commentary. That’s Pittsburgh and if we don’t have some honest conversations about it, we are only hurting the people in this meme and the others I previously described.  I know we aren’t supposed to feed the trolls  – but 24,000? That’s not trolls, that’s Pittsburgh.

I grew up in this Pittsburgh and have many acquaintances, neighbors and family members who profess these ideas – our City has a tremendous issue with people of color being treated as second-class citizens and it’s an ugly reality that we don’t like to discuss. Ever. Because all of those people know someone of color and probably someone who is queer, so that proves that they aren’t racist/transphobic/homophobic, etc. Except it doesn’t.

This the week that the Jordan Miles trial kicks into full swing. I say that because a lot of people seem to think Jordan Miles is on trial for walking while black and having the audacity to hold the police accountable for their conduct. This the week that Homewood neighbors arguing that the Animal Rescue League should consult with them before informing them of a block long development project which ejects people from their homes. This is the week that the Pittsburgh police successfully broke the residency requirement and blatantly trashed the City, the schools and the communities in the media as part of their victory lap.

It is not just that the police are racist and discriminate. It it is a combination of the in-your-face overt racism with the thousands of white progressives and moderate who want to ignore it and pretend all is well because they don’t live these experiences every day.

I’m a white woman, but I get a lot of stares – I’m fat, I have a sometimes prominent disfigurement of my eye and I’m often with my partner in public. We had a teen ager staring at us yesterday. It was annoying but not life threatening. I have been threatened and called a dyke and chased by young men. Our privilege as white women in a middle class life buffers us from this most of the time. But I don’t delude myself into denying the lived-experiences of people that I know – my friends, my comrades at the GLCC, my clients both current and former. I believe them when they tell me about dealing with hateful racist classist sexist crap every day. And I feel an obligation to amplify their stories.

If you truly loved Pittsburgh, maybe you would, too. Stop telling me what you love and tell me what you are willing to work to change even if it makes you uncomfortable or unpopular.

So good for the folks who reported this meme to Facebook. Keep it up. Don’t let them intimidate you with their silly little accusations about your lack of humor. Your sense of decency far outweighs their accusation. It has been reported that comments critical of the page are removed by the owners, but I haven’t confirmed that yet.

For the record, while the post above is awful I still believe that the post about the pregnant young women of color is one of the worst things I’ve ever seen especially as I read the comments.

What do I hope to accomplish?  Not much really. I don’t expect the page to come down or the posts to disappear because of sudden enlightenment from me. Haters – as they say – are gonna hate. But what about you? If you are reading this and thinking – wow, this is awful – what are you going to do? Will you report the page? Will you ask you friends to not like it? Will you examine your own conscience a bit more? Will you get involved in a cause or a project?

What are you going to do about it?