This is why we can’t have nice things in Pittsburgh. Content Notes: lots of hate. And few allies calling it out.

I pretty much think of any new “rah rah Pittsburgh” effort as a reflection on the #NextPgh concept. And this is not always good.

There’s a new Facebook Page called “Pittsburgh Meme” that is pretty self-evident – it creates memes about Pittsburgh using local images and those infamous meme memes floating around the Internet. Brace yourselves. For the record, 21,000+ people like this page including at least 30 of my own friends.

Funny? Sure, some of it is funny. Some of it is ugly. For each smack down of racial privilege and other actual funny things, there are lots of pics of fat women paying for food with SNAP, wearing skimpy clothing and generally offending by their very existence.

Blurring their faces makes it okay to write things like

Then there’s this lovely transphobia image which has been shared 145 times. 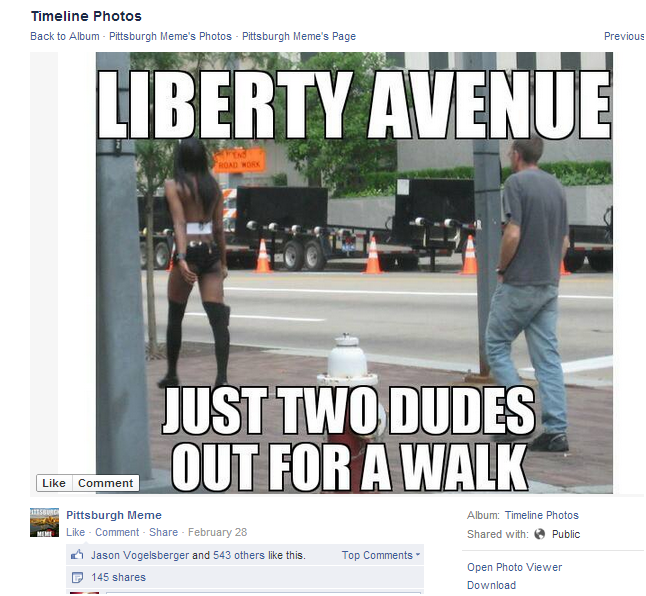 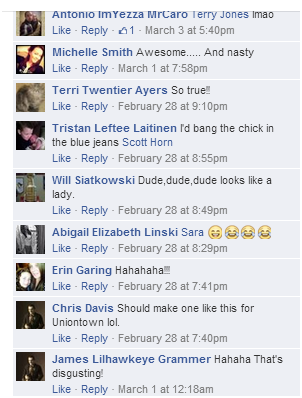 I’m not even bothering to cover up the names because their ignorance isn’t worth the effort. They deserve a little public shame and scorn.

This is actually a lot like the Pittsburgh where I grew up, but #nextpgh isn’t supposed to be about lifting up the hipsters and the yinzers at the expense of black folks, queers, transgender and fat residents. It isn’t funny, it isn’t creative and it DOES contribute to the social justice ills YOU fight against.

You can only have it both ways if you trade on your white privilege to “tee hee” about the hipster jokes then say “support my fundraising effort to help XYZ” with a straight, clueless face. The people being mocked most often are probably the ones who were part of the working class standing up to UPMC. How does that make sense?

Funny is mocking people WITH power and influence and prestige and respect – like white middle class men (those who are left), not demeaning vulnerable folks who are already dealing with more violence, crime, harassment and sexual assault because of their status and value in our society.  And to be fair, there are some great memes on this page that do just that.

This is how the page owners address it

Per their request, I unliked the page to let them have their fun. But this middle class, middle aged, life long white Pittsburgh resident with at least 6 generation of forefathers in the actual mills and lots of attendant Pittsburgh-esque memes defining my life thinks you are supporting true injustice by lending your like to this page. It isn’t funny to read this at all. Today is the rally calling for racial justice for Jordan Miles and Leon Ford in Pittsburgh. How exactly do we accomplish this while hundreds of their neighbors are spewing racial contempt all over this page and progressive allies turn a blind eye?

White straight folks liking this page are NOT allies to the LGBTQ community and I’d question their commitment to racial justice. That’s my meme. And if a page I’ve liked has similar content, by all means – take me to task on it. I’m responsible for where I put my stamps of approval.

This is about our town, these are our neighbors. It isn’t some far off distant Wal-Mart where the people are funny. These kids go to school with your kids. What message do you want to get from your social media – that you value and respect them and believe they have the promise to grow up to have a healthy, happy life? Or that they are so dehumanized that they deserve to be pin-ups on a Facebook page about their pathetic lives?