The Olympics begin tonight on NBC and while DAYS will apparently not be bumped for coverage, there is a very important concern for viewers, especially fans of #Wilson, Will Horton and Sonny Kiriakis.

As you may know, Russia has cracked down on “homosexual propaganda” under federal law and informal use of brutal and repressive tactics to assault LGBTQ Russians. So what does this mean for DAYS fans?

First, Sonny and Will as characters. Jackson “Sonny” Kiriakis is the great-nephew of a powerful Greek tycoon (former warlord), Victor Kiriakis. He has been embraced by his family including Victor. Will Horton is the step-son of a powerful Italian mob syndicate, the DiMera family. His step-father EJ and step-grandfather, Stefano, have also embraced Will and are very fond of him. So, technically, these men are well-connected to powerful European families with immense wealth & resources. Yet, they could not travel – together – to Sochi. They might be arrested, fined or imprisoned. And it wouldn’t be a soapy story, it would be the reality many LGBTQ couples and individuals face right now. If they were imprisoned on DAYS, Victor and Stefano would rescue them either by sending in a (younger) hero character like Rafe or Lucas or simply by trading on their power. Unfortunately (??) most of us do not have ties to powerful fake international criminal syndicates to rescue us in times of peril.

The second reason is Arianna Grace Hernandez-Horton, Will’s infant daughter whom Sonny is helping to raise. Russian law does not want homosexuals to raise children and even though Will is biologically her father, he could lose custody of her in Russia for exposing her to propaganda. We all love how much WilSon loves Ari – she brings a special magic to their family. Can you imagine someone saying Will isn’t fit because he’s gay? Remember when Nick did that? The difference is it would be the government. With guns and jails and soldiers. Not a secret pen recording device.

Then there is the show itself. Days does not air in Russia. It would absolutely be considered in violation of the propaganda law for promoting a positive portrayal of young gay male characters, especially raising a child. What’s more they are religious and religious figures are shown to approve their relationship. The show airs “Love in the Afternoon” shots of Will and Sonny being physically affectionate and even love scenes, as well as scenes in bed with little clothing. Just like they do of their heterosexual couples. Will is young, just a few years into college. He is often shown interacting with his younger siblings and cousins as is Sonny.

Days of Our Lives is a fictitious show with fictitious characters broadcast on the network airing the Olympics. NBC is profiting from an incredibly popular same-sex coupling and we need to connect the dots: ask NBC to make a statement about the Russian laws. I’m not suggesting a boycott or anything that absurd this late in the game (pun!) but it is feasible for NBC to support Team USA and all of the athletes and the people of Russia being persecuted by this unjust law by simply speaking out. They can make all the money that they want and not change a thing, just add some context to the conversation.

How can you help? CheersToSochi has an entire system in place to notify brands like NBC that you want them to take a stand.

#CheersToSochi is a protest movement calling on the Olympic and Olympic sponsors to speak out on behalf of Russia’s persecution of LGBT people. Russia is using law to deny LGBT Russians the exercising of basic human rights like speech, peaceable assembly, association and expression. The government is also failing to protect LGBT people from growing trend of violence, hate crimes, vigilantism, and horrendous torturous incidents that have become common. Despite the fact that evidence of these crimes is proliferating on social media as a new type of sport and entertainment, the Russian government generally refuses to investigate or prosecute these crimes. #CheerstoSochi uses parody of existing brand images to express disappointment, anger and outrage at these companies’ continued silence in the fact of human rights atrocities.

You can ask NBC – the home of #WilSon – to make a statement. Ask the actors as well – they all benefit from a profitable show with solid storytelling, asking them to speak out is a reasonable request. They make a living telling a story of acceptance, respect and dignity for two gay male characters, their daughter and their friends – Russian’s LGBTQ community deserves the same story. 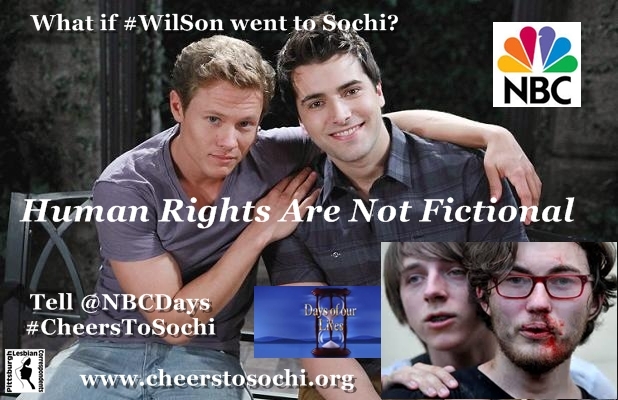