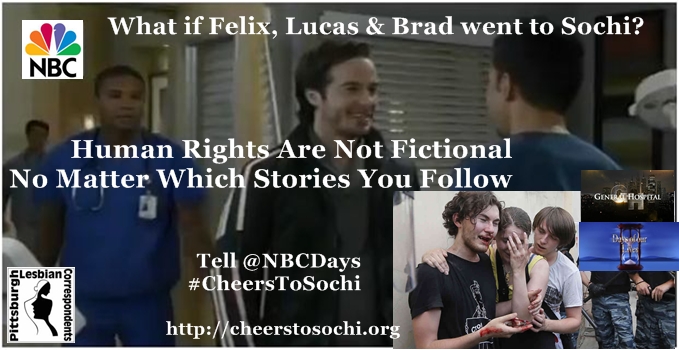 After yesterday’s post asking fans of “Days of Our Lives” to demand NBC speak out against the atrocities the Russian government is levying against their LGBTQ citizens, I realized that it certainly doesn’t stop with NBC soaps.ABC’s General Hospital has a frontburner story with the evolving love triangle of Brad Cooper torn between Felix DuBois and Lucas Jones. It is a groundbreaking story as two of the gay men are men of color. It is also groundbreaking because Brad Cooper is not the character we soap fans expect to be at the epicenter of a love triangle.

But let’s just take a step into Port Charles and speculate what might happen.

Lucas is the biological son of a mobster with ties to international crime syndicates and the “World Security Bureau” so he would have the best chance of getting aid from the Jerome syndicate. His sort-of-adopted cousin Nikolas Cassadine is head of an even larger family syndicate with possible Russian ties. His uncle is a devious con man who survives almost anything thrown his way and his former brother-in-law is also – surprise! – a mobster. So Lucas could potentially be extricated from a dangerous situation and certainly lots of people would send “their men” to get him if he were imprisoned. Oh gosh I forgot that his uncle is a spy with the WSB and his other uncle is a retired spy.

Brad Cooper is the biological son of yet another crime syndicate, this one of Asian and Asian-American descent. None of his relatives are on-screen (their story took place in the 1980’s) but one can imagine it was only brought up in casual conversation to  imply that the Wu family is still going strong.Would they lift a finger to help the prodigal great-grandson of Mr.Wu? Who knows? Brad’s adopted family (off-screen) are a nice middle class couple with no international or criminal ties.

Finally, there’s sweet Felix, the very nice if nebby nurse who has no cards to play. He is, however a nurse, so perhaps that would be a useful survival skill.

I’m being wry, but it really isn’t the least bit amusing. These are three character in an upstate New York based town who might travel. We care about them. And even though ABC is not hosting the Olympics, they clearly are covering world news and human rights abuses. ABC makes money from having a multiple flourishing LGBTQ storylines on General Hospital. And let’s be honest – without the success of NBC’s Will Horton and Sonny Kiriakis storyline, we wouldn’t be watching a love triangle unfold on ABC, much less one with two gay men of color.