You may have noticed that I bounce back and forth between two different set of daily prompts, Daily Prompts and BlogHer. Today, however, I found a common thread so I’m going to use both prompts

The Prompt: Unexpectedly, you lose your job. (Or a loved one. Or something or someone important to you.) What do you do next?

BlogHer: Tell us about a time you took the less traveled path. 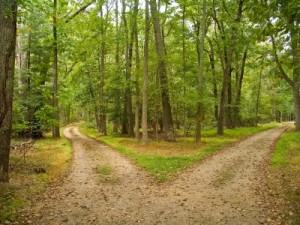 Let’s start with some clarification. The ‘less traveled path’ is a common misunderstanding of Robert Frost’s poem “The Road Not Taken” which was intended to be a sendup of wistful longing and implied regret at what could have  been if we had  made a different decision. Frost wasn’t being wistful, he was being playful about the fact that both roads (literally) were well trampled and everyone has regrets, but we have a tendency as a society to focus on the “what if” especially around small things.

We can’t know. There is no less traveled path because the path we choose to travel is the only experience we can have, right? Decide, embrace your decision and don’t look back. If you do look back, indulge yourself a moment or two, and then draw your energy and attention back to the present.

When faced with an unexpected loss, you don’t make major life decisions. You put one foot in front of the other and take care of yourself while you cope with the loss. But regret? Yes, this is the time when regret seeps into the corners of our minds and hearts as we ponder the situation. It is a vulnerable time for anyone – depending on the loss – and that’s where it’s most important to be mindful of the present and the future – the opportunities that are ahead of us to make different choices.

So to answer the specific question – if I experienced a loss, the next thing I would do is call Ledcat. When my dog became ill, attacked me in my home and left me bloodied on the floor, I called her and she stayed with me while we coped with the whole situation. I was diagnosed with PTSS after that experience and worked diligently not to blame myself or feel regret because I simply had done the best that I could. When my dear friend died unexpectedly, I called Ledcat and she stayed with me and took care of things at home so I could help his family. To cope, I slept overnight with his dogs and then started cleaning his house. I was overwhelmed with guilt and despair that I could never go back and see him one more time. So I focused on what I could do – take care of his dogs in that moment. Because they didn’t even understand what had happened to him.

That’s not to say I don’t give in to the temptation to both wonder “what if?” and beat myself up about what actually transpired. But there are no magic wands or fairy godmothers to undo the bad, but let us keep the good. There is no less traveled path, there is only the path we are on in our life, right now.

Being a social worker, being queer, being a blogger – all of these are things that might be considered paths less traveled because most people go into well-paying career paths, are straight and don’t bother blogging. But if I try to rewind in my mind to a decision that would have gone differently – there is none or at least none that I would know. Yes, I could have chosen not to pursue an MSW, yes I could have told John McIntire “no thank you” when he invited me to be on his radio program as his Pittsburgh Lesbian Correspondent and so forth. But whose to say what would have happened?

I do want to be very clear about the queer part. Do I wish I had known I was queer sooner or come out sooner? No. I realized I was queer when I was ready to be queer and I was pretty open rather quickly. And I wouldn’t change a single thing that led me to Ledcat – not a thing. So heartache, hurt, loneliness, rejection, pining away for someone who didn’t return my feelings, all of those things that sucked – all of them were the road, the path that led to her and so all of them are my path.

Recently, someone told me that I’m “facing the consequences” of a comment I made three years ago. I’ve thought about it for a while now, wondering if I should have not said it. The only reason I wish I had not said it is because I’m being punished and that sort of proves that my original point was right – that politics is politics of self-interest, not the interests of the community or the interests of the minority or the dissenters or the common good. I can’t go back and un-say it.  I can’t in good conscience apologize for something that I believed to be true at the time. I can apologize for the sake of apologizing and being able to avoid future punishment, but I prefer to just let it be – I’m on the far outside now and that’s okay with me. Crazy outsiders still deserve electoral representation. And I’m no worse off than when I first began blogging and no one knew who I was or cared. Plus, the idea of personal punishment being doled out over dissent or criticism is a bit unpalatable and makes me feel that keeping my distance is actually in my own self-interest. Because I’d probably say something else wrong anyway so why bother? (I might get shanked in my sleep a la Piper from Orange is the New Black – clip below – that’s a joke, fwiw) Plus, it still shocks me when the good guys are so unkind. I like kindness.

There are many things in my life the are dissatisfy me, but I prefer to focus on what can be done now or even tomorrow about them – not what should be undone in the past. Those other roads aren’t any better or worse. They simply don’t exist.