The Prompt: Merry Christmas (if you’re Christian)! Share a photo from your day. Also the best holiday ever is sometimes learning what happened back in the day to create your modern customs.

Merry Christmas! These photos capture the spirit of a family tradition stemming from my father’s maternal relatives – the Remleys. They were German and my great-great-great-great grandparents settled in Ohio in the 1860’s. His grandson and a few cousins come to Pittsburgh. Some settled on the Northside while my direct relative (Adam Remley) settled perhaps in what is now the Hill District. He died young and his widow, a Scots woman named Jennie, had to fend for herself and four kids, whom often spent great quantities of time with their German relatives in Ohio.

Eventually, Jennie’s son Gilbert Remley, married my great-grandmother and they settled in Allentown/Knoxville then relocated to Brentwood in the 1930s. My father and his older brother grew up living with their grandparents because their own father was in the military. But to be honest, at this point, no one was praising their German ancestry and so everyone quietly became either Irish or French with long-winded explanations about being from the disputed border territory of Alsace-Lorraine.

In spite of this, the family preserved several German holiday traditions, including setting up a “putz” or a Christmas village under or near the tree. This included trains, a nativity scene, and a house often made from wood or cardboard. It is unclear if this was common among all German immigrants or just Moravian families, but my German Catholic family certainly embraced it. They would set up an elaborate train set complete with village scenes and courtesy of the green sawdust made by great-great Uncle Harry Remley (living on the Northside) which he sold by the truckload throughout the region.

So the house pictured below was under the Gilbert and Jane Remley tree dating back to the 1910’s when they married. It is alleged to have been constructed by a family friend who was also a Pgh fireman. It has stain glass windows an is relatively intact except for one porch railing. It appears to be made of wood and painted. There is a hole cut into the back where the family inserted a single Christmas light.

The house is filled with animals for display, animals from all sorts of locations. Elephants, tigers, dogs, and more. I remember setting these carefully out as a child on my father’s train table. My Dad remembers some of them as toys, but many were part of the set long before he came along. For a long time, I thought this looked like the house my father grew up in and I was very puzzled because it didn’t seem like a Brentwood house.

Allegedly, there were two houses and my great-uncle had the other one so I’m unsure which relative has it now. I can’t leave this out because of the cats, so I set it up to take photos and admire. There are a few loose pieces of trim and such, but I don’t have the skills to fix it. Still, it sat in a closet for over 20 years so I give it a good airing and did the research to learn about “putz” houses.

The modern ceramic village houses are the descendants of these items, hence their often European flair. I have a few ceramic houses and promise one year to get it all out. In the meantime, it is very special to have direct link to my own childhood and my family history. 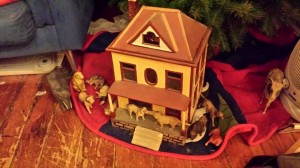 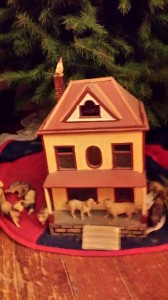 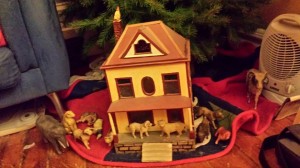