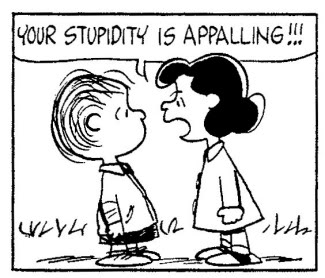 In the wake of Sue’s post about “Mike and Molly,” I have been trying to write something nuanced and thoughtful about another negative depiction of transgender people, and I am failing miserably.

I am failing because the bile just keeps coming up in my throat and I keep getting angry.

Here’s what happened: I am a big fan of Marc Maron’s podcast, “WTF.” A few weeks ago, he interviewed Dan Savage, and they commiserated about how each of them has been criticized by transgender people for not understanding transgender issues.

Then, this past weekend, I listened to a live episode of “WTF” recorded in Montreal, featuring Seth Meyers, Big Jay Oakerson, Tig Notaro, Trevor Noah and Eddie Izzard.

Hearing “tranny,” over and over again, was like I was being stabbed in the ears. “It”? “Whatever, tranny”?

“This is the kind of behavior you expect from a tranny”? Here’s a fun game: Try substituting the N-word, or a four-letter slur against Jewish people, into that sentence, and see what it sounds like. Yeah.

And Maron did nothing to call Oakerson out. And Seth Meyers—who is scheduled to take over NBC’s “Late Night” franchise when Jimmy Fallon begins hosting “The Tonight Show”—egged Oakerson on.

And so here I was, trying to write something fair, and thoughtful, and respectful, and I forced myself to listen to the podcast three more times, in case I was missing some nuances.

No, I’m not. The nuance is clear: As a transgender person, I skeeve out some men—gay and straight—so it’s OK to mock me. Maron regards himself as a liberal and a progressive, but hey, he doesn’t understand this whole “transgender thing,” so why not poke fun at our expense?

(If something makes cis-gender males—especially privileged white males—more comfortable, who am I to argue? I’m just a tranny! You know how emotional we get.)

And I’m not sure how that makes Marc Maron or Seth Meyers any different from right-wing Christian organizations—like the ironically named “Pacific Justice Institute“—who think I don’t have a right to use public restrooms or hold a meaningful job.

And as far as I’m concerned, it’s a short walk from, “It’s OK to poke fun at trannies,” to “trannies are a sub-human form of life,” to “let’s go kick the shit out of a tranny.”

And here it is, “Transgender Day of Remembrance.”

And reported murders of transgender people aren’t going down. In fact, they’re going up.

And the prime suspect in the beating death of 21-year-old transwoman Islan Nettles is walking around free right now. According to the New York Times, the suspect and his friends followed Nettles down a street in Harlem, taunting and harassing her, when they learned that she was transgender.

So I’m feeling pretty damn brittle right now and I’m not sure I can do nuance.

You know what, it’s not cool, and we’re not too sensitive, and we’re not here for your f–king amusement, and I don’t want to say that shows like “Mike and Molly” and people like Marc Maron actually have blood on their hands, but they sure as hell ought to know better.

P.S.: I sent a nuanced email to Maron and his publicist on Monday. Hey, that’s “the kind of behavior you’d expect from a tranny,” right? They didn’t respond. And if there’s one positive thing? Plenty of commenters on Maron’s website are ripping him to shreds for tolerating Oakerson’s shtick.