I’ve been waiting to see “The Hot Flashes” since summer when I read a recap/preview on the Bitch Media blog.  Brooke Shields, Darryl Hannah, Wanda Sykes, Camryn Manheim and Virginia Madsen …. playing basketball. And with the Bitch seal of approval, I knew it wasn’t going to be too schlocky. 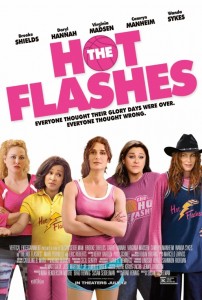 The setup is fairly conventional stuff – Beth’s (Shields) best friend Tess died from breast cancer a few years ago and left her estate to fund a mobile mammogram center in their small Texas town. Budget cuts are shutting down the van. She feels incredibly guilty because it was a paperwork snafu on her part that contributed to the situation. So she’s inspired to bring Tess’ teammates back together for a trio of charity games against the current female state champions, a team on which her daughter happens to play. Hilarity ensues. Heartfelt moments. And more hilarity. Cattiness. And more hilarity.

I watched this movie while I was home sick one evening and I found it to be terrific.

First, the importance of access to mammograms was made in an effective manner and the pinkwashing was poked quite a bit.  These were not women discussing bra colors or engaging in Facebook games or donating used lingerie to dangle over a pollution filled body of water before being donated to a poor woman. No, these are five women who had a concrete cause – they wanted to get the damn van back on the road.

Second, the humor was funny in a sweet and cheesy way with a few nasty twists (like the fate of the Christian Mean Girl) that just need to be made once in awhile. It was clear the women had each grown isolated in their adult lives and the games brought them out of those shells. Yes some of the “6 months later” threads were a bit of a stretch, but eh.

And the reason I loved this movie is that they put Camryn Manheim in a bustier and leather on Good Morning America to represent them. She was unabashedly sexy and proud of it. She was the baker, she was the smart-alec, she was the one who used unorthodox tactics to help achieve victory. She was good, bad, badass, and hot as all get out rolled up in one. Plus, she took care of her own self and her own needs, something that improved her 18 year marriage – she wasn’t rescued, she rescued herself.

Brooke Shields is hilarious. She’s so good at being an awkward, gawky somewhat mousey housewife that it’s hard to believe it’s her. I would love to see her take on more comedy roles. Darryl Hannah  is awesome as you would expect and still manages to delight. Virginia Madsen is unabashedly sexy and vulnerable. And Wanda Sykes is great. As in GREAT. She’s also NOT the lesbian character.

We need more movies about women who are funny and middle aged (or old!) No one was competing for a man among the five, no one was “made over” or sexed up. They held their own with one another as they aired some old grievances and discovered how much they had in common. It was far more interesting to watch five fully fleshed out characters interact than the high school team of identical brunetted ponytailed girls.

Let’s talk about the adult women/young girls interaction. The girls were a bit satirical in character with only Beth’s daughter having a real personality or lines. It wasn’t a movie about mentoring young women  – it was a movie about the lives they could lead if they focus on friendship rather than simply being a champion team. Or perhaps more appropriately, what a “team” looks like in real life, not in high school.

So I would rewrite the postscript scene, but otherwise it’s a humorous and sweet movie that will make you laugh. And then you can write a small check out for a breast cancer mammogram program in your community and keep your bra color to yourself.