When I first heard about the NATL (Not All Like That) Project producing videos from Christians who aren’t haters, I was very skeptical. So much that I ignored it. Yes,I had this niggling curiosity – I thought Dan Savage’s chapter in his latest book about his mother and their tie to the Catholic Church was one of the best things he’s ever written.

Then Upworthy sucked me in with a short video about the Lord family. So I visited the NALT site to check it out. I put the videos on continous play and just listened as I went about my work.

These videos are being shared on Facebook daily by all sorts of people among my “friends” that I would NEVER expect to do that. And it really freaks me out to hear so much “Jesus” talk attached to affirming messages. My body literally goes into a defensive crouch when the words “evangelical Christian” and “I love Jesus” are in the air – I can feel it, my shoulders hunch, my spine stiffens, etc. Obviously, I’ve internalized the damage a lot more than I thought.

I was raised in the Catholic Church in a Pittsburgh suburb. All was pretty routine until the diocese sent Father John Wellinger to shepherd us. He was creepy as all get out and it turned out he was a child molester, a drug dealer and did some incredibly damage to my friends and schoolmates, including more than one who committed suicide. To replace him, they they sent Father Dan Valentine who was terrific – I was in college and only encountered him on holidays. Recently, it was disclosed that Father Dan was exchanging inappropriate Facebook messages with a minor. I don’t know what that’s code for, but it isn’t good. And it hurts a lot to think that the diocese sent two such men to our parish.

Eventually, I left the Church. I tried a few other denominations, but eventually stopped going. Then I came out and knew I wouldn’t be welcomed back. For the past decade, I’ve listened to story after story of rejection, hate, ignorance and more. I thought I was simply an eye-roller who felt empathy for those rejected by their churches and anger over the systemic abuse of the national discourse by religious folks.

Until I listened to these videos –  these genuine expressions of remorse over what their fellow Christians have done, these apologies, these warm and welcoming words – I hadn’t thought with any real depth what impact my own experience of the Christian Church has been. I just thought I didn’t like it. I hadn’t realize how much these messages, this abuse has hurt me and how deep those wounds run.

I don’t mock people for believing. I envy them. I miss being part of a church community, but I honestly do not think I could ever feel at home anywhere but the Catholic Church. It’s part of my being. And the Catholic LGBT groups don’t touch it for me. I want the real thing. And I can’t have it. And that hurts. 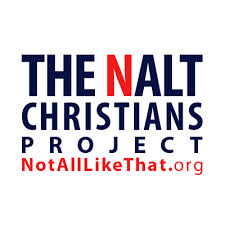 If you invite me to your church, I won’t believe you that “it’s different” because I’m surrounded by messages that say otherwise. And I’ll compare. I’ll find faults. I’ll reject it. The closest thing I found to a church home was a local Unitarian-Universalist Church, but the concept of a congregational church was just unacceptable with me – I felt like it was a group of wounded people determined not to be controlled in their faith. I like it, but I want a pastor preaching weekly, not alternative church experiences. So I skip the weeks when the pastor doesn’t preach and I end up skipping a lot. It’s just a place for me to visit.

So I keep listening to these videos and resetting those tapes in my head. And hoping that maybe NALT can help me find my way to place I want to be.