I’m circulating a petition asking a local business owner to meet and discuss a situation where an employee used the word “tranny.”

I’m encountering resistance from people who would prefer I not include the word “tranny” (even in quotes) because it offends them. It is vulgar. Or its so in their face. It is not appropriate.

They don’t like discrimination, they don’t. They don’t let their kids say “that’s so gay” and they treat people equally. They try to understand transsexuals and crossdressers and by no means do they think people should make fun of them. (Dripping sarcasm is mine.)

But, do I have to use the actual words when I send out my messages? Couldn’t I use something like “the t word” or “slur against transgender people” or something less in your face?

Sure, I could. But that’s the fucking point. Brandon at 7-Eleven wasn’t even necessarily about to slander the person he described as a “tranny”  – he was using it to describe the person – the black guy, the blonde, the fat lady with the glasses, the “tranny” (note how I keep using quotes?) I don’t know what he meant because he literally ran away when I confronted him about it.

But if he said “the nigger” or “the cunt with the blond hair” or “gimp who wears a backpack” or “the retard who goes to that school up the street” or any of those things — what would your reaction be?

My reaction to just writing those words is quite visceral – I feel very uncomfortable with the idea of publishing this post. I want to add a dozen disclaimers about the words to make sure people don’t think I use those words. But I also believe I need to make a point.

It sucks to be called a tranny. It sucks that a local radio station has an entire event around the word. It sucks that people don’t begin to know the right words to use to describe your identity, so they use THAT as an excuse to either use a slur or simply ignore you. I can’t describe in too much depth how much it sucks because I am not a trans woman and I’ve not had that slur hurled at me to my knowledge.

But just a week ago, I was writing blog posts about a trans woman pulled from a river. Her body was mutilated by knife wounds. She was tied to a chunk of concrete and a metal pole. And “tranny” is probably one of the lesser atrocious comments people made about her.

So in spite of my discomfort about using the word “nigger” in a blog post, I’m doing it for Cemia Acoff and the two other trans women of color murdered in April. And the lady at the grocery store where I shop. And my friends. And Trish. And because I can. And I hate the fact that I need to use dead women to make this point. Dead women of color who are trans women. Do you even begin to get the connection between them and this employee at 7-Eleven?

And for me. Because the experience of having to explain to a woman what a “tranny” is (and spell it!) was eye-opening. I said “its like using fag or cunt or nigger” and she got it. And so did I – dancing around the words reduces the impact they have on our lives and the people we love.

So you can delete the email because it offends you to read the word “tranny” and shake your head at my crass behavior.

Or you can sign the petition because it offends you that people have to hear this word every single day. 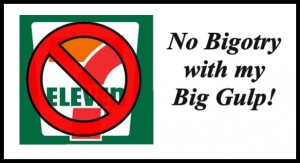 Either way, if you think the word doesn’t belong on LinkedIn or Twitter or Facebook? That’s the point.