Saturday evening, a group of friends joined Ledcat and me to celebrate her 50th birthday. We had dinner at Cambod-Ican Kitchen, a Cambodian fusion restaurant on the South Side of Pittsburgh. It is one of our favorites and we consider the owners to be very dear to us. We had champagne, we had birthday cake, we had singing and we had great food.

Around 9 PM, things wrapped up and after getting things sorted out – Ledcat and I talked about how best to get everything to the car which was parked about a block away on Carson Street. After 8:30 ish, South Side doesn’t feel so safe and welcoming for us – too many inebriated people, too much rude behavior and the occasional hassle. We hustled to the car, packed everything away and were safely on our way home.

Christopher Bryant, editor of Polari magazine, and his partner Damon were walking home from Bryant’s birthday dinner through South London’s Betts Park when the couple was intercepted by a group of six men, who started speeding up and following the couple down the path.

He told GSN: ‘It all went down so fast.’

When Bryant doubled-back to get the attackers off his partner, they beat him to the ground, kicking his face and saying ‘stay down faggot’.

Bryant said that every time he tried to look up, his attackers would kick him in the face and said ‘don’t try anything’. 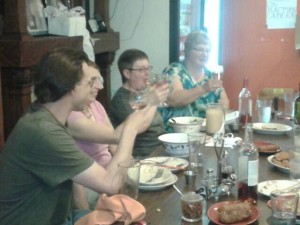 So at the end of our respective parties celebrating birthdays, we set out with our partners. We ended up safely at home, they ended up in the emergency room.

Really, it could have been different. There’s a tension in the air on the South Side at night – we rarely stay past 9 when we dine. Given what happened to JourDyn and Emprez at Margaritaville in January 2013, it is perfectly fair to assume there are homophobic assholes on the South Side who won’t hesitate to hit queer folks – men, women, any age, etc. It was just a few years ago when a very large man slid out of his car in broad daylight in Downtown Pittsburgh to confront us for being “fucking dykes.”

I don’t have some massive philosophical point to make. I’m just struck by the fact that it was the same night as Ledcat’s birthday. And I’m acutely aware of our “vulnerable” moments. And I’m sad. And angry. I can’t help thinking “My God what would I have done if someone attacked us on Carson Street while we were juggling cake and bottles of wine and presents and stuff?” Would the presence of people nearby have mattered? Would our friends at Cambod-Ican have heard (I know they would have come to our aid?) Would I have fought back? Would I have had a chance to deescalate?

COULD it have happened? Yes, it could have. See this photo.

We have to stand up to the hate. In the past few months, our team here has described a myriad of ways that homophobia and transphobia has hurt us – from Jen learning she still can’t be a den mother to the brutal murder of Cemia Acoff in Cleveland to a trans student being denied the right to   graduate with their chosen name. We’ve covered blogs being banned, sexual assault, the struggle to keep our jobs, the unfair taxes we pay, the strange situation of being unable to divorce, and so forth.

I hope you will take a moment to think how you can do something to make it better. Ledcat, Christopher and Damon are making it better today. Pick an action, any action and do it.