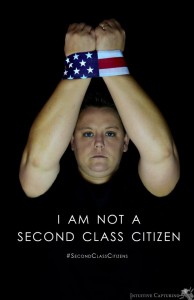 No!!  Of course you’re not! Well, Pittsburgh, here is your chance to tell the world that, and help a great cause at the same time! Get your “I am not a second class citizen” photo this Friday, in Pittsburgh! Ryan James Yezak is the creative mind behind this amazing new concept. A picture is worth a thousand words and this one may be worth more! The concept of being bound by the same flag that is supposed to represent freedom, chokes me up every time! Ryan is also the filmmaker of the documentary “Second Class Citizens”. Ryan has been traveling the country, interviewing LGBT people that our society treats as Second Class Citizens. I had the extreme pleasure of being a part of this documentary and I am so excited that the Official Campaign Shoot is being held so close to home!

This Friday, May 3rd, is the day! For full details and to join the conversation, check out the event page on FaceBook. The photo shoot not only gets you an awesome photo, but all proceeds go to help fund the production of the documentary, “that takes an all-encompassing look at discrimination based on sexual orientation.”

WARNING! This video can be hard to watch at times and always makes me cry! www.youtube.com/watch?feature=player_embedded&v=u62OtM_vt5k#!

The Second Class Citizens Campaign was created to support the imagery and message behind the film. The photo/video campaign consists of LGBT individuals and allies posing to declare that they are not second class citizens of this country”

Please support this by showing up for the photo shoot and sharing this blog! 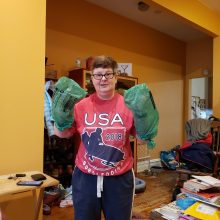