My first visit to Verde Mexican Kitchen and Cantina in Pittsburgh’s Garfield neighborhood was for a “tweetup” bringing together 25+ local social media users. Because I was volunteering for the evening’s charity of choice, I stopped by early to eat dinner without feeling rushed. I loved it so much that I purchased a gift card and took Ledcat back for Valentine’s Day – she is a big fan of Mexican food.

The decor is modern, we had no problems finding parking and the staff were very friendly. For Valentine’s Day, there was a special price fixe menu, but we opted to order off the regular menu.

Both visits, I ordered Enchiladas de Pollo (chicken enchiladas) because the description used the term “mild” – I’m a wimp. And it still had plenty of kick, but not so much that I couldn’t enjoy. Three good sized enchiladas plus side dishes meant that both times, I took half of my dinner home. Ledcat ordered one of her favorites – fish tacos (Tacos De Pescado) which arrived chock full of Mahi-mahi. She scarfed it all down and proclaimed it the best she’s had in Pittsburgh. Both of our orders came with a side of Spanish rice and black beans. I think during my first visit, they served a more traditional Mexican rice – I did not like the Spanish rice at all. The beans were fine and soothing when my mouth was on spice overload. 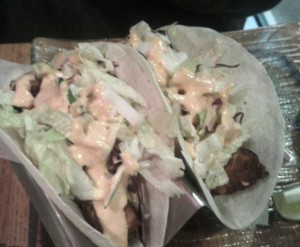 We did indulge in an appetizer (the complimentary chips and green salsa were delicious, but it was a special night) and opted for Empanadas de Verderas (black bean and corn.) These were delicious and we both loved the asado accompaniment.

For dessert, we ordered bread pudding (yum) and a newer dish – sort of a fried apple dumpling with jalapeno with a side of cinnamon ice cream. We both disliked the dumpling – the pepper overwhelmed the apple taste. We pushed it aside and split the other desserts, still having enough to take home. I had decaf and it was pretty good – I forgot to ask what brand they brewed. I hope it is local.

Verde is known for serving premium tequila. We did not drink, but my cohorts at the tweet up in December seemed to enjoy their drinks. The owner offered several specials to the group. I also notice that he’s using Twitter quite a bit which always appeals to me (@VerdePgh) as you know.

My only wish is for more dishes for those of us who cannot eat very spicy foods. I probably should simply ask if they can do that. I would also skip the rice next time. I appreciate the unique flair his kitchen brings to Mexican food and the menu itself is a joy to read, but some of us have to stop at reading and order something less creative – but should we?

If you like Mexican food, we encourage you to check out Verde.