We unexpectedly received an invitation to watch a taping of “No Fee TV” on PCNC. This show is hosted by Pittsburgh’s own, Edgar Snyder – a attorney whose personal injury Western Pennsylvania law practice is celebrating 30 years! 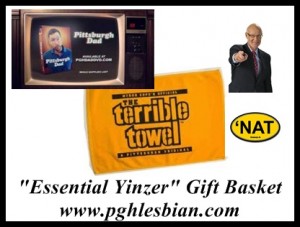 Those of us who grew up in the 80s and 90s grew up watching Edgar Snyder point at us through the television to assure that there was “no fee” unless he got money for us. Snyder’s team dubbed him “Pittsburgh Grandpa” based on the number of people who approach him to share tales of growing up watching his commercials and asking for a photograph. That’s pretty smart. And true.

Pittsburgh Dad – played by Curt Wooten – is a YouTube series of one-man vignettes about growing up in Pittsburgh. Wooten’s character embodies so many of the unique things about our Dads (and other adults) from die-hard Steeler fandom to using Edgar Snyder as a cultural reference. Watch this amusing episode as Pittsburgh Dad signs up for Facebook (catch the Edgar Snyder reference.)


Snyder and Wooten will be discussing their use of social media and other general topics on this episode of “No Fee TV” and they’ve invited the “burghosphere” (get it? Pittsburgh + blogosphere = burghosphere) to be in the audience. And they are giving away the “Essential Yinzer” prize pack to one lucky reader of this blog.

You can enter using the Rafflecopter below. You must leave a comment telling me what question you would ask Edgar Snyder or Pittsburgh Dad and you can earn more entries with Twitter, Facebook, Pinterest and such. Yes, Edgar Snyder has Pinterest boards.

What would I ask? I would ask Pittsburgh Dad when he’s going to reference an LGBTQ personality and how he’ll handle it to be funny without being offensive. I would ask Edgar Snyder to explain how DOMA (federal and state) impacts LGBTQ families in personal injury & disability law.

What would you ask?

Disclosure: In exchange for coordinating this giveaway, I have been invited to the taping (with Ledcat) and will receive a gift pack of my own. But since I have my own attorney and my own Pittsburgh Dad, I feel confident that my opinions aren’t influence by that exchange. I am considering watching the DVD with my Pittsburgh Dad (Jim – 72 years old, steelworker, grew up in Brentwood, etc) and sharing his opinions in a future pot!