Friday, January 18, 2013
What would be your superhero name and why?

Today is the “half-year” anniversary for Ledcat and me … 9 and 1/2 years together. We have an ongoing “discussion” about what constitutes our anniversary since we aren’t able to legally marry. But she humors me. 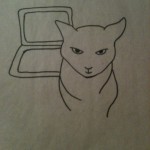 So, one time I asked my Facebook friends to suggest a portmanteau for us, as a joke because of another ongoing debate — is it Sue and Laura or Laura and Sue?

Two proper names can also be used in creating a portmanteau word in reference to the partnership between people, especially in cases where both persons are well-known, or sometimes to produce epithets such as “Billary” (referring to former United States president Bill Clinton and his wife, United States Secretary of State Hillary Clinton). In this example of recent American political history, the purpose for blending is not so much to combine the meanings of the source words but “to suggest a resemblance of one named person to the other;” the effect is often derogatory, as linguist Benjamin Zimmer notes.[14] In contrast, the public and even the media use portmanteaux to refer to their favorite pairings as a way to “…giv[e] people an essence of who they are within the same name.”[15] This is particularly seen in cases of fictional and real-life “supercouples.”

The answer? SueCat aka the supercouple smoosh name trend. Note that I normally object to silly exclusive word contortions guised as word play. But smooshing adds a bit of hoi polloi to the usual mix of exclusive communty building.

Laura is my hero. She is a source of strength. And so I would pick SueCat as my superhero name.