Congratulations to Brian Sims who won the Democrat primary to run for State House in District 182 (Philly). Brian faces no challenger in November and is on course to be the first openly gay person elected to statewide office in Pennsylvania. From GayPolitics.com.

Brian Sims tonight has won a decisive Democratic primary in his Philadelphia district and will become Pennsylvania’s first openly gay state representative.  Sims defeated a longtime incumbent to capture the Democratic nomination in the heavily Democratic District 182, and will face no Republican opponent this November.

and CEO of the Victory Fund, which endorsed Sims.  ”LGBT Pennsylvanians will finally have a voice in their state legislature, and what a strong and unyielding voice it will be.  We are thrilled for Brian, who ran a remarkable campaign.”

Sims, a former member of the Victory Campaign Board, is a distinguished policy attorney and civil rights advocate from Center City Philadelphia. The former Staff Counsel for Policy and Planning at the Philadelphia Bar Association, he recently stepped down as the President of the Board of Directors of Equality Pennsylvania.

This is a very interesting turn of events. This district – previously represented by a progressive veteran Babette Josephs – is an interesting turn of events. While Josephs has been a supporter and ally, its an unusual situation for me to be celebrating the defeat of a female legislator by a white gay male.  An interesting situation. It parallels the battle in which Kathleen Kane defeated Patrick Murphy for State Attorney General. Many people that I personally know were very torn in what seemed to be a battle of equals.

Here in Western Pennsylvania, progressive Erin Molchany won the primary for the Pennsylvania 22nd House District.  In an interesting twist, decidedly unprogressive Marty Schmotzer will fill out the term of former Representative Chelsa Wagner who stepped down to assume a new role as County Controller. Schmotzer will hold office until 2013 when Molchaney is sworn in.  Molchany had strong endorsements from Western PA progressive stalwarts including Stonewall Democrats, Gertrude Stein Club as well as environmental and labor groups.

Ed Gainey unseated long-term Democrat Joe Preston in Pittsburgh’s heavily East End House seat. One time LGBT ally Jason Altmire conceded to Mark Critz in a battle for a US Congressional District. IMHO, neither has a leg to stand on when it comes to LGBT support or support for women – Critz’ support for labor is pretty much his only progressive credibility.

What does this all mean? Pennsylvania is by no means a solid blue or solid red state. (Ironic that lavendar might be the best description?) Progressive women lose to gay white men. African-American man unseats white Democrat. Blue dog  Democrat loses to relatively inexperienced somewhat more palatable Democrat. White woman with solid credentials defeats popular (also qualified) white male who is perhaps the bravest ally of the LGBT community nationwide.

Wow. This is actually pretty exciting. 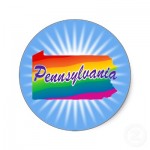 From the LGBT perspective, I’m quite eager to see where the dialogue goes … will there be a rallying cry for marriage equality? will the east and the west sit down with the middle to start working out a serious platform we can all support? will folks recognize that the situation at Pitt with regard to no formal policy on transgender issues is untenable and something that marriage equality can’t resolve? will someone take a closer look at the current TEN pieces of gay positive legislation sitting in the PA General Assembly and help us sort that out?

If I had my druthers, here’s what I’d like to see happen

I’m looking forward to candidates Molchany and Gainey meeting with Brian Sims. And if you try to say I don’t have a voice in that request because of my previously stated concerns about my district, you missed the entire point. I don’t lose my right to speak my mind because I have doubts.  Was it six years ago we were all excited about electing Chelsa Wagner?  That didn’t lead to much for Manchester. I have no doubt Erin will vote well on LGBT issues, but almost every piece of campaign literature has referenced her South Hills districts. I’m looking forward to what she’s going to do here in the City.