I am sad to share that many  of the LGBTQ friends identify as pro-life. Granted, I am fine with them making their own 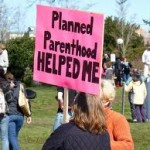 decisions and I have plenty of straight friends who also identify as pro-life.

But the right to privacy that protects my body from YOUR decision-making is also the same fundamental Constitutional right that keeps my BEDROOM from your decision-making.  Look it up. It isn’t rocket science.

Beyond the legal connection, it is important to understand the vital role organizations like Planned Parenthood play in protecting women’s health and serving as a bridge to the LGBTQ community. 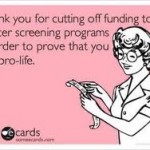 Soooo let’s break this down. Susan G. Komen Race for the Cure has been a long-time supporter of Planned Parenthood’s work providing vouchers for mammograms.  Under duress from the right wing unwavering attempts to destroy Planned Parenthood, the folks at SGK made the decision to pull $680,000 in annual grant money. You can go read all the ins and outs of the legal maneuvers, but trust me – there’s a clear path from the financial decision back to anti-choice Republican lawmakers who are using CANCER as a power play. Why, that doesn’t even surprise me.

Sooooo, the gay angle. Well aside from the very obvious fact that this is about breast cancer, not abortion (ahem) there’s the fact that LGBTQ women (and men) get breast cancer. We need screenings. We need vouchers. We are disproportionately underemployed, underpaid, lacking in health insurance, lacking job protections, lacking PTO for medical appointments, lacking in LGBTQ sensitive health care providers, etc, etc, etc.

Planned Parenthood of Western Pennsylvania has been here for us.

There’s more. There is another path to the LGBTQ community and that is through the person of Karen Handel. Who?

Karen Handel, a former secretary of state in Georgia and a Republican activist, was hired in April as vice president of public policy at the Dallas-based Komen. Handel was coming off an unsuccessful run for governor of Georgia during which she frequently called for an end to abortion.

There’s no proof that Handel had a role in the foundation’s decision to end a relationship between two major women’s health organizations that’s paid for some 170,000 breast exams and 6,400 mammogram referrals since the groups began their partnership in 2005.

Handel has a solid anti-gay record. Here’s an interview from 2010. I have to print the whole thing b/c it just so clearly exemplifies why they are coming for us next. Count on it.

A: I am against gay adoption. But remember — I mean, if there is legislation on that, certainly I will follow that and look at it. But in the end, ultimately courts are going to be the ones to have to make the decision on that and it’s always in the best interests of the child. Do I think that gay parents is in the best interest of the child? No. But we do have our court system that deals with many and most of those issues.

A: Yeah, I would consider that, absolutely.

Q: Do you know any gay couples with children?

Q: So you think gay couples are less qualified to function as parents than straight couples?

Q: Is it better or worse than a single parent household?

A: Doug, I’m really trying to be straightforward with you but I’m not going to debate all the nuances. I’ve made it abundantly clear that I think that marriage is between a man and a woman. And that’s what I believe, and I don’t know what more you would like me to add to that.

Q: I guess I want to know why you think gay parents aren’t as legitimate as heterosexual parents.

Well … she doesn’t think you can parent your children. She’s willing, as of 2010, to outlaw your adoption. What if she were to go so far as to attempt to invalidate them (someone is trying that with marriage in Canada) Feeling secure in that quasi-right to privacy bubble now?

Now the extent that Handel played a role in the SGK decision is unclear. It was internal. She’s a VP with national street cred. She’s bff’s with Sarah Palin. She brings in donors and supporters. Ledcat just asked me how she went from running for Governor in Georgia to a high level position with SGK. Good question, Ledcat.  But we both can agree that the timing is interesting and that its simply ludicrous to claim this is not political.

Politics shouldn’t get in the way of delivering healthcare to vulnerable women. Stop laughing, I’m serious. Women might die because of this. I guess, as one blogger put it,  that’s one way to reduce unwanted pregnancy? Not laughing anymore, are you.

Gay peeps, you gotta shake this Pgh Catholic guilt let’s pretend we are part of the parish and everyone likes us because we

sing well and dress nicely and bake for the Lenten dinners and all that bull shit. Be Catholic, whatevs. But stop stop stop stop deluding yourself that you can be pro-life and claim a right to privacy. You can’t.

Hey, I struggle with it BUT I don’t bury my head in the sand and deny the facts. If you have kids, especially children, you’ve adopted – just stop pretending you can be pro-life. How is your child growing up in a society that despises you and is attempting to demonize you pro-life? Shouldn’t you be at least fighting against that? Potlucks don’t count.

And don’t think you are safe. State Representative Darryl Metcalfe has a lot of power and the Pennsylvania Family Institution has a lot of cash amassed as well as reach throughout the entire Commonwealth. It starts with “marriage workshops” and works its way out.

I get that you don’t want to be an activist. Maybe you really have a reason to go to Chick-Fil-A (the kids liking it doesn’t fly) but … walking in Race for the Cure this year is just beyond the pale. Seriously. How will it honor the survivor or victim in your life to SUPPORT refunding a program that prevents other women from losing their lives to breast cancer?

It doesn’t. It won’t. And you are delusional if you find a way to rationalize this. Stop with the pink and the teams and the attempt to pretend you are just like any other suburban couple. You will NEVER be just like them if you believe there is no right to privacy.

Want to do something about it?

Please, please think about this. Try to understand the legal connections and imagine what happens to your family if the attack on Planned Parenthood is successful.

And here’s a breakdown from 2011 on the Pa Family Institute agenda for Pennsylvania.